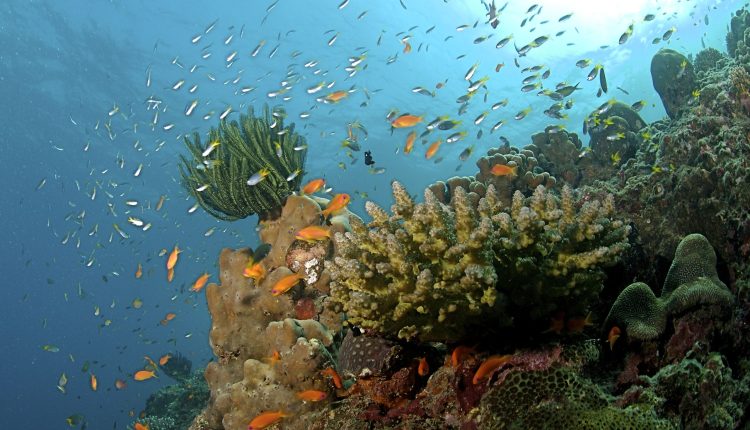 India is one of the world’s 17 mega-biodiverse countries, harbours 7-8% of the world’s recorded species, and supports various ecosystems, including forests, deserts, mountains, wetlands, grasslands and coastal and marine ecosystems. The last two are of particular importance; they include mangroves, coral reefs, estuaries, seagrass, mudflats and lagoons, occupying 7,516 sq. km, a continental shelf area of area 468,000 sq. km and an exclusive economic zone (EEZ) of 2.02 million sq. km.

These ecosystems are home to numerous marine species, including charismatic and critically endangered species such as sea turtles, whales, dolphins, sharks, rays, dugongs, whale sharks and sea cucumbers. Further, around 171 million people, including fishing communities and Indigenous peoples and local communities (IPLCs), live along India’s coastline. These ecosystems also serve as traditional sources of livelihoods to about 16 million fishers. Together, the fisheries and aquaculture industries contribute around 1% towards India’s GDP.

However, India’s biodiversity is rapidly becoming less rich. The health of our coastal and marine ecosystems is impacted by a host of threats, including exploitation of resources, plastic pollution, habitat degradation, coastal erosion and climate change. These threats are also affecting the lives and livelihoods of local communities that depend on these ecosystems for sustenance. The coast of India is witnessing a decline in fish catch, a very large dead zone has been reported from the Bay of Bengal, and the population of different marine species, including sharks and rays, has been shrinking.

Cognisant of these threats, India – as a party to the international Convention on Biological Diversity (CBD) – recently expressed its support for a global target known colloquially as ’30×30′. Its aim is to protect and conserve 30% of the world’s terrestrial, freshwater, coastal and marine ecosystems. The target is currently being negotiated by parties to the CBD as part of the post-2020 ‘Global Biodiversity Framework’. The 30×30 target could help India protect its coastal and marine biodiversity, while providing economic benefits, food and water security, climate change adaptation and mitigation, and sustaining the livelihoods of coastal communities that depend on these ecosystems.

What counts towards the 30×30 target?

’30×30′ is a global target, which means that parties to the CBD together, have to protect 30% of the world’s land and sea. So depending on national conditions and circumstances, each country will be left to determine the percentage of its own geographical areas that it will allocate towards meeting this target. Areas that will be counted include area-based conservation measures like marine protected areas and other effective area-based conservation measures (OECMs) that are established in territorial waters; the EEZ of each country; and parts of the high seas (i.e., waters beyond national jurisdiction).

Marine protected areas are geographical areas established and managed for the primary purpose of protecting marine ecosystems and species. OECMs, on the other hand, are broader and help achieve sustained positive biodiversity outcomes irrespective of their management goals. OECMs will protect marine biodiversity – as well as yield a range of benefits to people who depend on marine resources. Some examples of OECMs include sacred natural sites, areas managed by small-scale fishers, traditionally protected marine reserves or fishing grounds, historic shipwrecks and protected water catchments.

According to a recent brief prepared, among others, by the UN Environment Programme, it is essential for area-based measures under the 30×30 target to deliver effective conservation outcomes in order to meet the target. So the effective management of marine protected areas and OECMs is crucial to achieving this outcome. Areas that count towards the target must provide ecosystem services and be important biodiversity sites, be ecologically representative, and be part of well-connected protected area networks. These areas also have to be effectively and equitably managed.

In this context, the 30×30 target provides an important opportunity to help secure the participation of IPLCs. A rights-based approach – that is, integrating human rights into conservation policy – must be adopted while declaring IPLC territories as marine protected areas or OECMs.

Thus far India’s terrestrial areas have received significant attention, but the time is now ripe to focus more on underrepresented coastal and marine areas. According to India’s Sixth National Report, protected areas cover approximately 27% of India’s geographical area. Of this, only 5% of coastal and marine areas are designated protected areas. This makes it all the more important for India to sign on to the 30×30 target and take appropriate actions to achieve it.

Currently, there are 25 marine protected areas in peninsular India and 107 marine protected areas in the Indian islands. Increasing area-based conservation under the 30×30 target could help restore and conserve biodiversity, help marine species adapt to climate change and revive fish stocks, thus saving the livelihoods of local communities that depend on marine resources. Area-based measures are important nature-based solutions for mitigating climate change’s impact, and effectively designed and well-managed marine protected areas and OECMs could also help alleviate stressors like deoxygenation and acidification, and preserve natural storm barriers like coral reefs and mangroves.

In light of the UN’s recent flagship climate report and its emphasis on how South Asia, including India, is vulnerable to extreme weather and sea-level rise, working towards the 30×30 target will also help India, including its ecosystems and communities, become more adaptable and resilient.

Increasing area-based measures for the 30×30 target could also help India generate considerable economic benefits, through revenue from nature tourism and ecosystems services. A working paper drafted by a team of scientists from around the world also identified a number of non-monetary benefits such as food security, reduced disease emergence, protection against flooding and soil loss, and improved clean water availability.

In recognition of these benefits, India must identify biodiversity-rich coastal and marine areas that are currently threatened and bring them under protection using its legal and regulatory framework.

While the Wildlife (Protection) Act 1972 is the primary legislation the government uses to protect marine species, one could say it is also terrestrially oriented. Currently, there is no separate procedure laid down to declare marine protected areas. Coastal and marine areas are mostly declared ‘national parks’, ‘sanctuaries’ or ‘biosphere reserves’. In these places, extractive activities are prohibited or highly regulated, and this affects local fishing communities as well, which is why they are opposed to the government declaring new marine protected areas.

If the protection afforded to marine ecosystems is to be effective, the Wildlife (Protection) Act needs to accommodate the unique socio-economic and ecological characteristics of the Indian coastal and marine ecosystems.

Then again, the Wildlife (Protection) Act isn’t the sole source of opportunities within the Indian legal and regulatory framework to establish marine protected areas. For example, the government can use the Territorial Waters, Continental Shelf, Exclusive Economic Zone and Other Maritime Zones Act 1976 to declare ‘designated areas’ for the protection of marine environment within India’s continental shelf and EEZ (the Wildlife (Protection) Act is not applicable to the EEZ).

There are several submerged banks in India’s EEZ that the state can explore. One such area with ‘protected areas’ potential is the Angria Bank, a submerged plateau spanning 650 sq. km and situated 135 km off the coastal Konkan belt of Maharashtra, within India’s EEZ. It supports large coral reefs and algal habitats, and harbours diverse flora and fauna.

While marine protected areas are one set of the tools through which India has been conserving and protecting its marine biodiversity, OECMs from India could provide new and different opportunities to conserve areas falling outside the marine protected area network, and to recognise diverse governance approaches – especially community-led efforts.

There are traditionally managed areas along the Indian subcontinent and island systems that the government can recognise as potential OECMs. India has also designated certain seascapes as ‘important marine mammal areas’ (IMMAs), important coastal and marine biodiversity areas (ICMBAs) and ‘ecologically and biologically significant marine areas’ (EBSAs). For example, the Wildlife Institute of India has identified 106 coastal and marine sites as ICMBAs.

These categories serve as knowledge tools to help identify areas that have the potential to be delineated and managed for conservation – but are devoid of management implications. For an area to qualify as an OECM, it is essential that the area be managed in ways that achieve sustained biodiversity outcomes. Therefore, IMMAs, ICMBAs and EBSAs can qualify as OECMs only if the management of these areas results in long-term conservation outcomes.

One concern about the 30×30 target is the profound impact it may have on IPLCs, if it is implemented without involving local fishers in the decision-making process and without proper planning. For most coastal communities, the coastal and marine areas are their sole source of food and income. This means increasing conservation efforts under the 30×30 target could raise concerns for these communities, as they may fear losing rights over their territories and marine resources.

So it is important that they be made primary decision-makers in conservation efforts and for their rights to be recognised while including their land to meet the 30×30 target. Communities have to be involved in management strategies, and be made aware of the positive impact of community-led conservation efforts, such as higher fisheries yield and food security, revenue from ecotourism, enhanced climate resilience, and retention of traditional values. Doing so would be a win-win for the people and nature.

Despite the threats India’s coastal and marine biodiversity faces, the ‘Global Assessment Report on Biodiversity and Ecosystem Services’ of 2019 pointed out that there is still hope for India’s biodiversity to recover, through transformative change. India must in turn take appropriate measures to effectively achieve the 30x30target over the next decade, with the government coordinating with all stakeholders – including civil society, concerned citizens, businesses, scientists and local communities.

If implemented properly, the 30×30 target could help India attain two goals – the sustainable development of its coasts and people, and the conservation of its unique coastal and marine biodiversity.

The post What the ’30×30 Target’ Could Mean for India’s Marine Biodiversity appeared first on The Wire Science.

After winning bronze at Tokyo Olympics, PV Sindhu returns to…