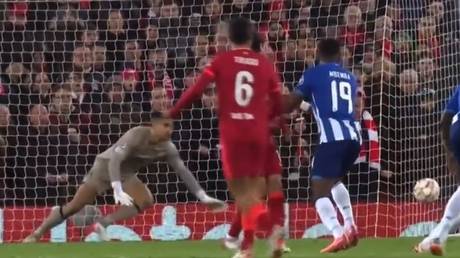 Liverpool star Thiago scored a barely believable goal in his team’s Champions League victory over Porto which some fans claimed defied the laws of gravity.

Jurgen Klopp’s team made it a perfect five wins from five games in Group B with a routine win against the Portuguese visitors at Anfield thanks to second-half strikes from Spain midfielder Thiago and the prolific Mo Salah.

Thiago’s finish in particular was one to savor as the 30-year-old star sent a volley skimming across the top of the pitch and low into the corner of Diogo Costa’s net in one of the most aesthetically-pleasing goals in recent memory.

On repeat from now on🤤 #lfc #thiago pic.twitter.com/XuKAmNqLTq

Thiago scored this beauty for Liverpool. That technique! 🙌🔥

The upward movement of the ball, Thiago is incredible😍🔥❤️

And I choose to believe it didn’t bounce off the ground, idc about physics or gravity😂🙄 pic.twitter.com/bwailRnOjr

Online, fans were dumfounded at the strike – calling it a “thing of beauty” and claiming they could watch it endlessly.

There was debate as to whether the sublime finish had bounced slightly off the Anfield turf before finding its way perfectly into the bottom corner, but one thing most could agree on was that it was a finish for the ages.

“I choose to believe it didn’t bounce off the ground, [I don’t care] about physics or gravity,” wrote one fan.

Thiago. A goal to watch on loop. And for an age 🔥

“Ste, How many times have you watched Thiago’s goal?”

Joël Matip is all of us watching Thiago’s finish 😱 pic.twitter.com/UbDAybweD1

“It felt better to win the game, to get the three points, to see that the team was still hungry even though we are qualified for the next stage,” said the modest Thiago when asked about his strike afterwards.

“So I think that’s the best feeling, that we are still in that mood, that we want to win every game and most of all here at home.”

Next up for Liverpool is a Premier League meeting with Southampton at Anfield on Saturday.

Olympics: India clubbed with Germany in hockey Pool B

Saw the game with ‘do or die’ attitude: Shankar…