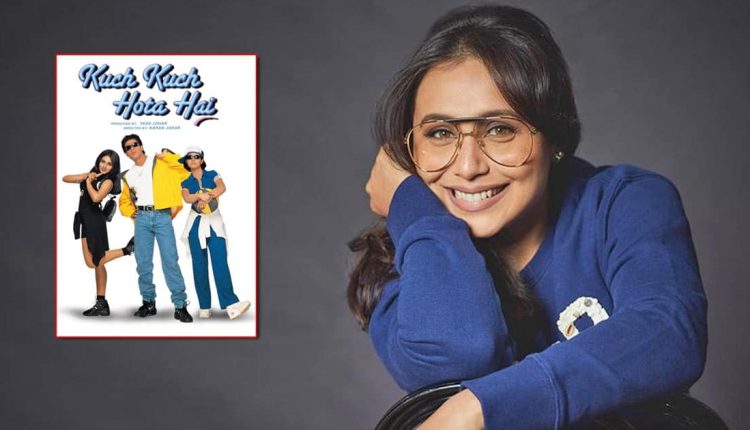 Karan Johar’s 1998 romantic-drama film ‘Kuch Kuch Hota Hai’ was one of the most loved movies of those times. The story of friendship and the love triangle drama was a classic hit at the box office. Rani Mukerji, Shah Rukh Khan, and Kajol’s performance in that movie was so immaculate that it’s still spoken of today!

However, not only some spectators of the film but the lead actor, who played the role of Tina in the film, has now opened up on the s*xism narrative in the film! Check out what the ‘Mardaani’ actress has to say about why Rahul (SRK) fell for Tina and not Anjali in the first go itself.

During her interview with India.com, Rani Mukerji was asked about the movie and the undigestible plot of the film. Rani stated that she couldn’t go on to judge the character of the film but she definitely would defend Rahul’s (Shah Rukh Khan) character for following his heart.

Rani Mukerji said, “Falling in love is something very subjective to each person and we can’t judge a person for their choices because, at the end of the day, it’s your heart. You can’t direct your heart to do things that a particular person would feel is morally right or morally wrong. What might come across right to you might be wrong for the other person. I think considering all the flaws that we all are living with, we should not sit and judge others for what they are doing.”

“She was kind-of someone who was very hard to get for him (Rahul) which resulted in him having the curiosity to go more after her. The fact that she sang ‘Om Jai Jagdish Hare’ on the college campus while he thought that she’s born and brought up in London… the fact that she is so deeply rooted to her culture and that she’s so grounded – those and a lot of other things probably attracted Rahul to Tina as a person as well.” Rani added.

Concluding her reply, Rani said, “I won’t categorise it as ‘he went for someone who looked great and not for Anjali who was more of a tomboy.’ I won’t make it as frivolous as that. I would say that there was a lot of depth to Tina’s character for someone like Rahul to have fallen for her… because, at the end of it all, it was Tina who understood the love that Rahul and Anjali had for each other. She, in turn, makes her daughter reunite the two of them. You know there that Tina had a lot of depth along with being a good-looking girl.”

Earlier in 2016 the director of the movie, Karan Johar himself admitted that he would have changed the plot of the film if he had to remake it during today’s time because of the s*xism in it.

What do you think about Rani Mukerji’s reply on Kuch Kuch Hota Hai’s plot? Let us know in the comments below!

The post Rani Mukerji Clears The S*xist Plot Claims Between Her, Shah Rukh Khan & Kajol’s Character In Kuch Kuch Hota Hai: “We Should Not Sit & Judge” appeared first on Koimoi.

Bhediya: Varun Dhawan’s Rugged & Dishevelled Look On Poster Is Lifted From This 2018 Thriller?

Vivek Oberoi On His Role In ‘Inside Edge 3’: I’d Touch The Scar & It Served As A…

KBC 13: Amitabh Bachchan Meets The Jury Of Shark Tank India, Asks If He Can Pitch A…

When Akshay Kumar Made Comments On ‘Male DNA’: “It Is Composed Such That He Will…

Atrangi Re Music Album Launched With An Exclusive Concert! AR Rahman Says “When A…

Why is Kareena Kapoor obsessed with Jennifer Lawrence? These pictures will explain

Los Angeles has turned into ‘The Purge,’ detective warns

VHT 2021/22 live streaming: Where to watch and TV details of Vijay Hazare Trophy

Not giving compensation, jobs to kin of farmers who died during protests would be big…

Can’t let children with rare diseases die, no explanation by Centre for not utilising fund: HC

Jimmy Sheirgill Once Recalled “My Entire Family Did Not Talk To Me For A Year-&-A-Half Properly”, Here’s Why

When Sajid Khan Broke Long Kept Silence On Break Up With Jacqueline Fernandez: “When You Don’t Have A Woman In Your…