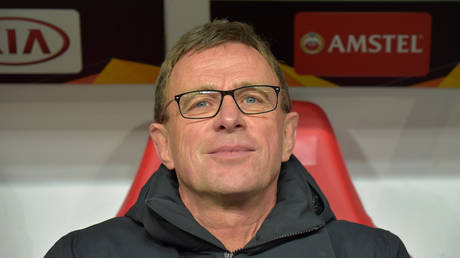 Manchester United have reached an agreement with Ralf Rangnick to become interim manager, according to reports. The German is currently working as head of sports and development at Russian club Lokomotiv Moscow.

According to The Athletic, Rangnick is set to agree a six-month deal with the Old Trafford giants, subject to the agreement of Lokomotiv – which is not anticipated to be a problem.

Rangnick will then serve in a consultancy role for a further two years at United, according to the outlet.

Is Moscow-linked Ralf Rangnick the man to save Manchester United?

If confirmed, the 63-year-old will replace caretaker boss Michael Carrick, who presided over the 2-0 Champions League victory over Villarreal earlier this week.

Carrick, a former Manchester United midfielder, had stepped in after the sacking of Ole Gunnar Solskjaer following the embarrassing 4-1 Premier League loss to Watford last weekend.

The widely-respected Rangnick previously managed at clubs including Schalke 04 and RB Leipzig in his homeland. He is seen as the pioneer of the modern German coaching approach, which has enjoyed considerable success through the likes of Liverpool boss Jurgen Klopp and Chelsea manager Thomas Tuchel.

Rangnick enjoyed success as a director of football in his role at Red Bull clubs Leipzig and Salzburg.

On arriving at Lokomotiv Moscow in the summer, he set about remodeling the team and the set-up.

An emphasis was placed on youth and several older players were sold – including Polish international Grzegorz Krychowiak, who was previously seen as a key component of the team.

READ MORE: Man Utd’s spectacular fumble of Solskjaer situation is yet another example of a club running on empty

A work permit will need to be finalized for Rangnick, meaning he will not be in the dugout for United’s game with Chelsea this weekend, according to The Athletic.

Once he does arrive as expected, he will be confronted with a daunting to-do list which includes reversing the slump United found themselves in at the end of Solskjaer’s tenure.

The Old Trafford club are eighth in the Premier League table, having lost five of their 12 games thus far this campaign. That included humiliating home defeats to Liverpool and Manchester City.

There was cause for celebration on Tuesday night, however, as United picked up a 2-0 win in Spain which saw them secure a spot in the Champions League knockout stages.

When Akshay Kumar Kept A Close Eye On Wife Twinkle Khanna & Bobby Deol After Their Sun-Bathing Rumours Started Doing The Rounds In Media!

Growth policies being drawn up for each sector: Prabhu