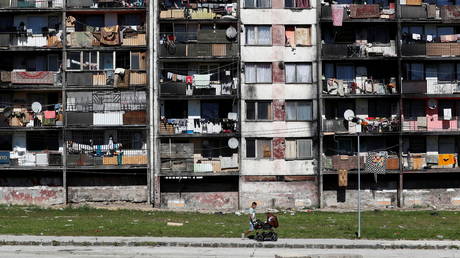 Slovakia has apologized for the forced sterilization of women under the communist regime and the following decade, condemning the practice which aimed to regulate the birth rate of the socially disadvantaged Roma peoples.

On Wednesday, the government adopted a resolution condemning the practice of forced sterilization and apologizing for the actions of previous administrations. “The government condemns sterilization as a means of regulating the birth rate of the socially disadvantaged, which took place mainly among Roma women,” the text of the resolution reads, according to Germany’s DW news.

The practice dates back to 1966 and continued after the collapse of the communist regime. The policy was part of a series of force measures taken against “citizens of Gypsy origin,” and aimed to “reduce the unhealthy population” by sterilizing women. The practice continued until 2004.

Official documents suggested the state intended to tackle health-related issues among the Roma community, however, modern research claims that sterilization often took place under pressure, with threats, and without a proper understanding of what the procedure meant.

In a statement, the government’s official for the Roma community, Andrea Buckova, condemned the historic human rights violation. “What the previous regime was capable of in relation to Roma women is inadmissible,” she stated, adding that “regulating the population of any minority or group is comparable to the methods of the Nazi regimes.”

Buckova noted that it was extremely concerning that these practices had continued until 2004, long after the fall of the communist regime.

Although the real number of victims is unknown, Buckova suggested that it was well into the thousands. In 1987 alone, some 1,823 were sterilized, the statement notes.

She said the government’s decision to apologize was the correct one and that the next step would be compensating those who fell victim to the practice.

The marginalized Roma community makes up 9% of Slovakia’s population, according to EU figures. Their exclusion from wider society was highlighted in September when Pope Francis visited the infamous Lunik IX slum in Kosice.

Law protecting religious people from ‘cancel culture’ in the works

What would an India A, India B, India C Test team look like?

Drake Shocks His Fans With This Move Involving The Grammys

The unspoken scars of breast cancer survivors in India

This Season, I’m Giving the Gift of Self-Care With These 16 Wellness Bundles

Here’s All We Know About The Bizarre Data Fraud Case That Suggests Akshay Kumar,…

Is The Amazfit GTR 3 Pro The Best Smartwatch You Can Buy Under Rs 20K?

Watch: Mitchell Starc bowls Rory Burns behind his legs with the first ball of the…

Seriously, & Other Stories Has the Cutest Sweaters in the Game—Shop These 30

I’m Indecisive When It Comes to Holiday Gifts, But These Were an Easy Yes

Watch: Comedian Danish Sait gets ‘advice’ from PM Modi about…