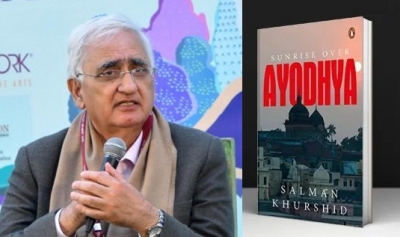 NEW DELHI, Nov 25 : The Delhi High Court on Thursday dismissed a plea seeking direction to stop the publication, circulation and sale of former Union Minister Salman Khurshid’s controversial book for its alleged remarks on Hindutva likening it to radical jihadist groups like ISIS and Boko Haram.

Adv Raj Kishor Chaudhary, appeared for petitioner Adv Vineet Jindal and pointed out the comment in a chapter called “The Saffron Sky” on Page 113 of the Congress leader’s book “Sunrise over Ayodhya: Nationhood in our times” which reads — “Sanatan dharma and classical Hinduism known to sages and saints was being pushed aside by a robust version of Hindutva, by all standards, a political version similar to jihadist Islam of groups like ISIS and Boko Haram of recent years.”

During the course of the hearing, the bench of Justice Yashwant Varma orally observed that it’s just an excerpt in the book. Further, the counsel argued that the book will create communal problems and then requested to remove the excerpt.

“Tell everyone that the book is badly written. Tell them to read something better. what can we do if people are so sensitive. Nobody has asked them to read it,” the judge said while dismissing the petition.

According to the plea, it was stated that the equivalence of Hinduism to ISIS and Boko Haram is perceived as a negative ideology Hindus have been following and Hinduism is violent, inhuman, and oppressive.

Freedom of speech and expression under Article 19(1) of the Constitution goes hand-in-hand with reasonable restrictions that may be imposed under Article 19(2), so, in a country like India, which is perpetually on a communal tinderbox, where religious sentiments run deep, where respect for certain public and historical figures always come accompanied with veneration for their demi-god status, it doesn’t take much for malice to be coated with a toxic communal hue based on the contents of the book, it contended.

FY20 GDP growth at 5% as per first advance estimates: Govt