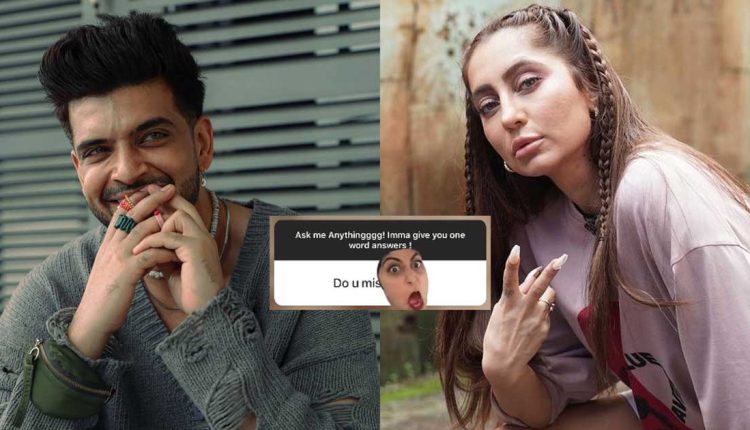 Anusha Dandekar aka VJ Anusha has been cropping in the news on a regular basis owing to her breakup with actor Karan Kundrra. While the actor – who is in the Bigg Boss 15 house, is winning the hearts of audiences, Anusha has been quizzed about the star on several occasions.

From asking the VJ if she misses him to even why they broke up about more, Ms Dandekar has answered several questions. Now, she got asked the same once more and she has a kicka*s response to the follower who asked her that.

Anusha Dandekar recently conducted an ‘Ask Me Anything’ session on Instagram and shared some of the questions that came her way. Being the sport she is, VJ Anusha even shared the question “Do y miss (an animated face screaming no)” While we cannot see who the fan asked she’s missing, the host’s answer answered that.

Sharing the question on her Instagram story, Anusha Dandekar put the animated over Karan’s name and wrote, “Same question a zillionnnnnn timessssssss Get overrrrrr ittttttttt”

Well, we hope the actress’ latest response stops fans and followers from repeating the same question time and time again.

Last month, Anusha Dandekar took to her Instagram account and shared a cryptic post on Instagram after Karan Kundrra expressed regret over their breakup on Bigg Boss 15. Taking a jibe at her ex-boyfriend Karan, she wrote, “He doesn’t lie to you because the truth will hurt your feelings. He lies to you because the truth might provoke you to make choices that won’t serve his interests.”

The post Anusha Dandekar Gives A Kick-A*s Reply To A Fan Who Ask If She Misses Ex-Boyfriend Karan Kundrra appeared first on Koimoi.

When Mallika Sherawat Compared Herself With Former US President Barack Obama: “I Feel That My Life Is The Same As Obama’s”

Jaydev Unadkat upset at not being picked in extended India…