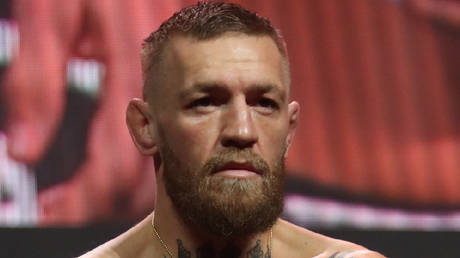 UFC icon Conor McGregor has said that Covid vaccines aren’t working – days after blaming “hypocritical” governments rather than the unjabbed for a new round of lockdowns.

Warning that “Ireland will rise”, McGregor said his country had endured “the longest lockdown in the free world” and is “not to blame for the undersupply of our healthcare system”.

“Those in government are,” he added, referencing Ireland’s high vaccination rate of nearly 90 percent of its entire eligible population.

Conor McGregor’s thoughts on the vaccines, a based king 👑 pic.twitter.com/EJE02SZHrz

McGregor is known for rapidly removing his often-vicious missives towards the likes of former title rival Khabib Nurmagomedov.

The 33-year-old took the more surprising move of briefly leaving up a message about Covid treatments on Monday.

“The vaccines have not worked to stop this whatsoever,” he said. “More vaccinated than ever. More cases than ever. Re-evaluate entirely. Stop taking handouts.”

The UFC’s most marketable active star has paid for and delivered almost $1.5 million in PPE during the pandemic.

“Frustrated with these new restrictions in Ireland,” he announced last week. “We’ve done our part and we’ve followed the rules.

“And yet we move forwards only to move backwards again. All we ask for is clarity, and we have gotten none since the beginning.

“For [deputy prime minister] Leo [Varadkar] to… directly blame the non-vaccinated is the most divisive comment I’ve seen yet.

“It is neither the vaccinated, nor non-vaccinated, nor any Irish citizen for that matter, who is responsible for this unpreparedness. It is government.

“We are almost three years into this. We have came together time and time again.

Medical advice from connor mcgregor? What you on about? How about you do some proper research. People like you that have their heads up their arses are causing this to drag on and fueling it. Suppose you support vaccine passports as well and the firing of unvaccinated staff.

The 5% unvaccinated in Ireland are representing between 50-65% of critically sick patients in ICU in Ireland yet “vaccines are working whatsoever”. Ok Doctor

“The audacity. I am ashamed of my nation’s government at this time.”

There was predictable cynicism towards McGregor’s tweets. “You’re taking medical guidance from Conor McGregor and not healthcare professionals but believe I sound thick?,” asked one user in a Twitter argument.

“The five percent unvaccinated in Ireland are representing between 50-to-65 percent of critically sick patients in ICU in Ireland, yet ‘vaccines aren’t working whatsoever’. Ok, Doctor.”

It’s probably the only time I’ll ever agree with him on anything.
Need more like him to speak up & put an end to this shit.
*Its a virus ull get it at some point
*it’s not as bad as the media make out
*get the jab or don’t it’s your decision
*stop the government dividing people

McGregor usually wakes up and chooses violence but this morning he’s going after vaccines? Dude just can’t stay down

“Medical advice from Conor Mcgregor?,” asked another. “What are you on about? How about you do some proper research?

“People like you that have their heads up their *rses are causing this to drag on and fueling it.

“Suppose you support vaccine passports as well and the firing of unvaccinated staff.”

Among McGregor’s supporters, one included the hashtags “no more lockdowns” and “unvaccinated”, writing: “Never thought I’d agree with him.”