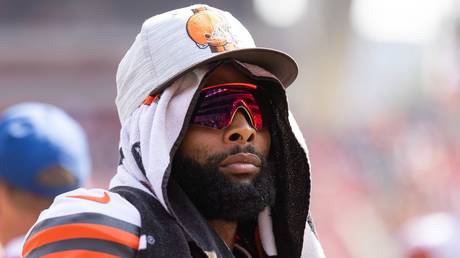 One of the NFL’s top stars has become the most high-profile athlete to announce they are receiving their entire salary in cryptocurrency, pledging to give $1 million in bitcoin back to fans.

The 29-year-old, who is said to have earned around $15.5 million in his final year with former employers the Cleveland Browns, has now revealed that he will be coining in crypto with his new team.

“It’s a new era and, to kick that off, I’m hyped to announce that I’m taking my new salary in bitcoin,” Beckham Jr told his following of more than 4.1 million on Twitter.

“I’m looking forward to the future. That’s why I’m taking my new salary in bitcoin.

“To all my fans out there, no matter where you are: thank you. I’m giving back a total of one million dollars in bitcoin right now, too.”

Beckham Jr then asked his fans to reply with their ‘cashtag’ details in a tantalizing offer that will purportedly see him share some of his abundant wealth.

BREAKING: Odell Beckham Jr. has teamed up with Cash App and will be taking 100% of his new NFL contract in Bitcoin.

Beckham Jr also announced on Monday that he is expecting his first child with model girlfriend Lauren Wood.

The announcement is the latest example of the growing take-up of cryptocurrencies among leading athletes.

In August, it was reported that part of legendary striker Lionel Messi’s signing on fee of around $33.5 million at Paris Saint-Germain would be paid in bitcoin ‘fan tokens’.

Several NFL players have already made the move towards bitcoin pay. “I’m excited about the future of cryptocurrency and am a big believer in Bitcoin,” Green Bay Packers quarterback Aaron Rodgers declared earlier this month.

“So much so that I’ve chosen to take a large portion of my salary in Bitcoin… cryptocurrency is a new concept to many and can be intimidating to understand.”

Ahead of the latest emphatic win of her celebrated MMA win ten days ago, former UFC champion Cris Cyborg gave fans the chance to transfer her bitcoin through a code on her t-shirt.