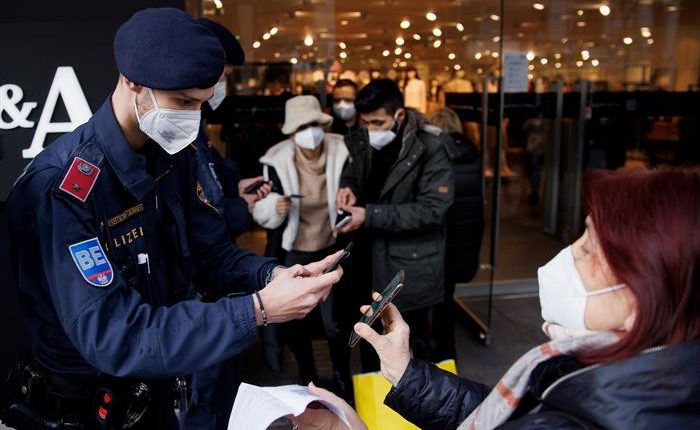 The lockdown in the Alpine nation comes as average daily deaths have tripled in recent weeks and some hospitals have warned that their intensive care units are reaching capacity.

The lockdown will last at least 10 days but could extend to 20, officials said. People will be able to leave their homes only for specific reasons, including buying groceries, going to the doctor or exercising.

Schallenberg apologised to all vaccinated people on Friday, saying it wasn’t fair that they had to suffer under the renewed lockdown restrictions.

Earlier, Austria had tried out a lockdown just for unvaccinated people but it did not slow infections enough.

“I’m sorry to take this drastic step,” he said on public broadcaster ORF.

Not quite 66 per cent of Austria’s 8.9 million people are fully vaccinated, and inoculations have plateaued at one of the lowest rates in Western Europe.

Austria is among several Western European countries where infections are rising rapidly and where there are concerns that vaccination rates are insufficient to hold off a winter surge at hospitals.

Thanks largely to inoculations, hospitals in Austria are not under the same pressure they were earlier in the pandemic, but many are still straining to handle rising numbers of COVID-19 patients while also attempting to clear backlogs with exhausted or sick staff.

Austria’s new lockdown is its fourth since the pandemic began and comes as the country has struggled without success to stop spiralling case numbers. On Friday, it reported 15,809 new infections, an all-time high.

Christmas markets, restaurants and most stores are closed for at least 10 days, while kindergartens and schools will remain open for those who need them, but all parents were asked to keep their children at home if possible.

After 10 days, the lockdown’s effects will be assessed. If virus cases have not gone down sufficiently, it can be extended to a maximum of 20 days. After that, the lockdown will be lifted for all vaccinated people but could stay in place for those who refuse to get vaccinated, the government says.

The new measures, especially the vaccine mandate, have been met with fierce opposition among some in the country. A Saturday protest in the capital city of Vienna drew 40,000 people, according to police, including members of far-right parties and groups. — AP

‘Some fatalities’, more than 20 injured after speeding SUV ploughs into Christmas parade in Wisconsin

COVID-19 cases in Illinois by ZIP code: Search for your…

Alexandra Shipp Has Her Eyes on the Prize, Not the Clock