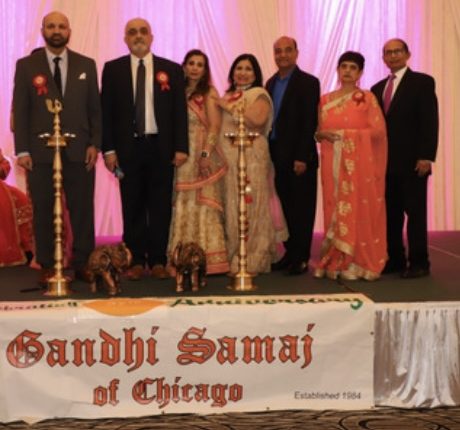 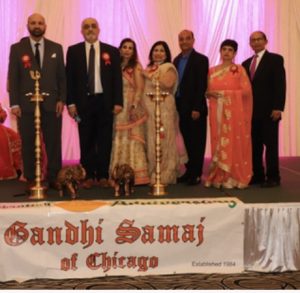 CHICAGO, IL- The Gandhi Samaj of Chicago Illinois celebrated Diwali on Sunday November 7th, 2021 by throwing a grand gala at the Ashton Place Banquets between 5.00 PM and 10.00 PM. The gala dinner was attended by the who’s who of the community and well represented by individuals from various walks of life.

The event started with a Ganesh Stuti, invoking Lord Ganesh blessing on the auspicious occasion of Diwali.

Past President Hitesh Gandhi took the stage and spoke about the Gandhi Samaj of Chicago and its history. The work that it has undertaken for and on behalf of the community over the years. Thanking each and everyone present for their support and then took the opportunity to invite chief guest Sunil Shah, Guest of Honor Pankaj Modi, Event Chair Tushar Vyas, Invited guests Kevin Morrison Commissioner of Cook County, Dr..Gopal Lalmalani, President Oakbrook Village, Nekohl Johnson, Executive at Loretto Hospital, Krishna Bansal, Meghna Bansal Trustee Naperville, Shweta Baid Trustee Aurora, Gurmeet Singh Dhalwan, Gladson Varghese, Pinky Thakkar, Altaf Bukhari, Hina Trivedi, and Gandhi Samaj of Chicago current President Mrs. Kalpana Gandhi and Dimple Gandhi to the podium for the traditional Lamp Lighting, 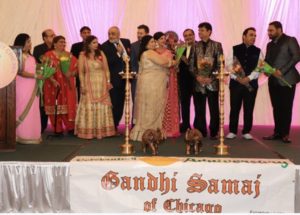 The current President in her address to the gathering after the Lamp Lighting thanked everyone for their presence and spoke about Gandhi Samaj of Chicago and its importance to the community. She thanked all the office bearers for their invaluable inputs and their help in putting together this event. She also thanked all the performers and singers who provided entertainment to the gathering. She then thanked Puneet Sawhney of Ashton Place for his help in making the gala a success.
This was followed by the entertainment section of the program starting with dances by the Saloni Group, Kenner Carman, Hema Shastri, and Saloni. After the dances, singers took the stage namely Gaurav Patel, Meena Sheth, Kiran Sheth, Meeti Vyas, and finally Geetanjali Maru.

For more information on the Gandhi Samaj of Chicago please get in touch with Hitesh Gandhi on +1 630 205 3265 email: [email protected]