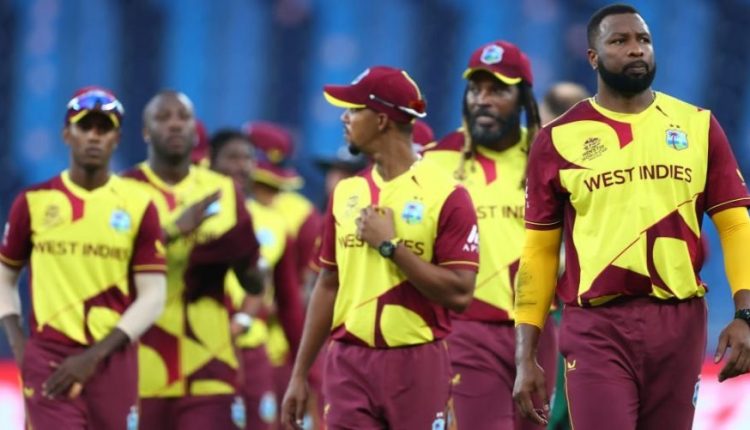 West Indies’ T20 World Cup title defence has been weakened considerably after losses to England and South Africa, and even win in all three of their remaining games might not be enough. Aadya Sharma examines what’s gone wrong with Kieron Pollard’s team.

Two defeats – one, an annihilation at the hands of the world’s No.1 ranked T20I side, and another, a gentler, but still comprehensive loss to a team fighting its own internal battles has put the spotlight firmly on Pollard & Co. A dream team on paper, West Indies have looked imbalanced and out of sorts in the two games, and look to be running out of time as far as their T20 World Cup hopes are concerned.

It’s a combination of factors that have brought them where they are, and it could well be the last time we see some of these stars donning the T20I kit. Here’s what’s gone wrong for the side:

Ravi Rampaul, 37, was recalled after a six-year hiatus to lead the pace attack, with Obed McCoy and Oshane Thomas, two recently-unearthed, promising quicks, pushed to the sidelines. With McCoy not playing the second game, the attack looked even more fragile, and the creaking joints of Andre Russell and Kieron Pollard chipped in for the rest of the seam-bowling overs alongside Dwayne Bravo.

Russell and Pollard, while still powerful batters in the middle order, aren’t the bowlers they used to be, and Bravo, 38, is not the bowler he once was. The spin attack lacks bite: without Fabian Allen, Akeal Hosein and Hayden Walsh Jr have been asked to take up the bulk of work, and while they are talented players, leaving them with the responsibility of snaring wickets in the powerplay in a tournament so dependent on the fortune of spinners is probably asking too much. On Tuesday, as Aiden Markram and Rassie van der Dussen went about scoring runs with ease, you could see the skin coming off a half-baked attack.

Lendl Simmons is hurting them at the top

For a team that is filled with power-hitters (Bravo comes in at eight), you’re blessed enough to have enough options to make a solid top three and take on whatever comes your way. Instead, West Indies have stuck  with Lendl Simmons at the top, and the results have been quite underwhelming.

Since the start of this year, Simmons, who has a career strike-rate of 120.80, has played nine out of 14 innings at a figure less than that mentioned, five of which have been sub-100 strike-rates. It reached a bizarre low during South Africa, when he helplessly scratched to a 35-ball 16, undoing, to a large extent the hard work laid out by Evin Lewis at the other end. With Chris Gayle, who himself takes time to settle in, that’s a heavily imbalanced top three that looked out of sorts in the powerplay, on pitches where batters need to really get going in the first six.

Lack of anchor in the middle

It’s partly the result of what happens at the top, but the skewed line-up means there’s a string of power-hitters to follow: in Pooran, Pollard, Hetmyer and Russell, they’ve got a fine middle order, but if the top order crumbles the way it did against England, the lower half can really struggle to build partnerships against spin and get the innings back together.

In such a scenario, West Indies would have been helped by the contrast of having a floating anchor, one who could get them out of tricky starts and lay a platform for the aforementioned strikers to finish off. Roston Chase has exhibited those traits, albeit in different formats and competitions, but wasn’t tried at all in T20Is leading up to the tournament (nor in it). It left them with a lopsided middle order, and the manner of collapse in the two innings showed just why it was all wrong.

Lack of game time together

There’s no questioning the experience of the side (heck, four of them have played over 350 T20s), but the manner in which the West Indies side was assembled together for the tournament should have been a red flag in itself. Rampaul was called back for the first time since 2015, Bravo earned a recall after a year away in March (similar for Russell, add another year for Gayle), Chase has never played a T20I. Some of them were out of touch as well – Gayle, who has hit one T20I fifty since 2016, averaged 21 in the IPL this year, Pooran has just three 30-plus T20I scores since the start of 2020, and averaged 7.72 in 12 IPL 2021 games.

In the end, it looked like an assortment of ageing cricketers, brought together like old bands reuniting for a testimonial. Individually, all of them have done their bit and more in several T20 tournaments around the globe, but the proper lack of game time together was evident in how they succumbed to the same mistakes. Against England, every batter’s dismissal (barring Pollard’s) looked like it was least affected by the fate of its predecessor – a collection of loose wafts and brash hits came out against the run of play, as if each player was playing his own individual game. Eventually, the only thing common for all of them was which side of the result they all ended up being on.

How did the English players fare in the Abu Dhabi T10 League?

With arms, oil as fulcrum, Modi-Putin summit to set out new areas of collaboration

‘A fan is not a criminal’: Why thousands of Russians are walking out of football…

Did You Know Aayush Sharma Was A Part Of Ranbir-Deepika’s ‘Yeh Jawaani Hai Deewani’?

Antim Fame Aayush Sharma On Being A Part Of Ranbir Kapoor, Deepika Padukone’s YJHD: “For The First Time I Saw…”

Katrina Kaif & Vicky Kaushal’s Wedding Mandap To Be A Glass Gazebo & The Groom To Enter With 7 White Horses?