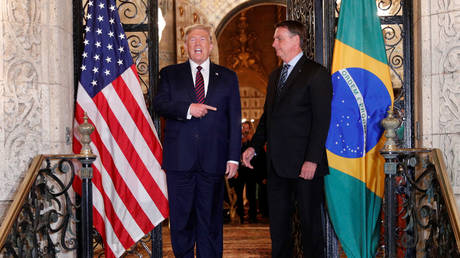 Former US President Donald Trump has expressed support for Brazilian President Jair Bolsonaro after a parliamentary committee recommended charging the latter with “crimes against humanity” in relation to his Covid-19 response.

On Tuesday, seven senators of an 11-member Brazilian Senate commission assented to bringing nine criminal charges against Bolsonaro – on the basis of a high-profile report that compiled the findings of a six-month inquiry into his administration’s handling of the pandemic.

Hours after the announcement, Trump released a statement noting that Brazil was “lucky” to have Bolsonaro “working for them.” Describing him as a “great President”, Trump said he would “never let the people of his great country down.”

President Jair Bolsonaro and I have become great friends over the past few years. He fights hard for, and loves, the people of Brazil – just like I do for the people of the United States.

The endorsement was appreciated by Bolsonaro’s son, Eduardo, who tweeted his thanks for the “fine words” and described both his father and Trump as “two patriots who love their countries”.

Dubbed the “Trump of the Tropics,” Bolsonaro had become one of Washington’s closest Latin American allies during Trump’s presidency. Both leaders have regularly exchanged praise for one another, with Trump saying he was “honored” to have his 2016 US election victory compared to Bolsonaro’s triumph in 2019. In May 2019, the US had designated Brazil as a “major non-NATO ally”.

The report, which was tabled last week by the Senate’s Parliamentary Inquiry Commission (CPI), found that Bolsonaro’s government had “deliberately exposed the population to the [explicit] risk of mass infection,” including through the “deliberate delay” of vaccine purchases.

Centrist Senator Renan Calheiros, the report’s lead author, called for the CPI’s recommendation to charge Bolsonaro with crimes against humanity to be referred to the International Criminal Court (ICC). Brazil is a party to the Rome Statute, which created the Hague court – but the ICC would first need to determine whether the case has merit.

In addition to crimes against humanity, the Senate committee has recommended Bolsonaro be indicted for eight other charges, including incitement to crime, falsification of documents and the violation of social rights. He was also accused of malfeasance, irregular use of public funds, violation of sanitary measures, as well as charlatanism and facilitation of an “epidemic resulting in deaths.”

Following the vote on Tuesday, Calheiros said that the “chaos of Jair Bolsonaro’s government will enter history as the lowest level of human destitution”. He had also asked last week for an indictment of two companies and 77 other people, including Bolsonaro’s three adult sons, several ministers, former ministers and businessmen.

However, another of the president’s sons, Flavio Bolsonaro, said the CPI report was a “totally political” document “without any legal basis”. Also accused by the report, he criticized “some senators” on the commission as “[intending] to cause the maximum amount of wear and tear on the President.”

Bolsonaro himself previously dismissed the investigation as a politically motivated “joke.” He has continued to maintain that he is “guilty of absolutely nothing” and insisted that his government “did the right thing” from the “first moment” of the pandemic. More than 605,000 people have died in Brazil from Covid-19 – the most of any country except the US.

The document will now be handed over to Brazil’s Prosecutor General Augusto Aras, who was appointed by Bolsonaro in September 2019 and is considered the president’s ally. It is unclear if he would go ahead with an indictment.