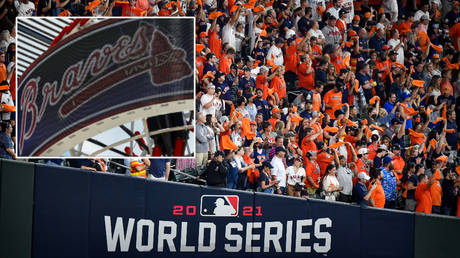 A row over whether a ‘Tomahawk’ gesture made by fans of a baseball team is offensive has seen supporters hold up signs calling it racist – but the MLB commissioner has described the North American community as “wholly supportive”.

Houston Astros fans were seen holding up eye-catching cards with slogans including ‘the chop is racist’ during their 6-2 defeat against the Atlanta Braves in the World Series at the Minute Maid Park, continuing a debate around a gesture that has repeatedly divided onlookers.

The majority white fanbase of the Braves have been known to hold their arms ahead of them in a ‘chopping’ gesture during the game – a move that has been described by the National Congress of American Indians as a discriminatory symbol.

“[It] reinforces the racist view that Indians are uncivilized and uneducated, and it has been used to justify policies of forced assimilation and destruction of Indian culture,” the group has told the Atlanta Journal.

#Astros fan brought a giant “The Chop Is Racist” sign to the #WorldSeries pic.twitter.com/2dyzhP0djm

“[It is a] ritual that is still widely practiced and consumed on television by sports fans across the country, [and] it is a painful perpetuation of the ‘warrior savage’ myth.”

While some fans called the gesture racist in response to photos emerging of the signs behind held up among the visiting fans, others did not agree.

I can’t wait to see the Braves stadium packed and in full force later this week!

The Chop is NOT racist, it’s bad ass. Braves fans should tell the left to take their cancel culture and shove it! pic.twitter.com/7mK5A6IhRk

The Communist Democrats of America forced the Cleveland Indians to change their team name, and now they’re trying to say the famed Braves chop chant is racist.

I’m so sick of these people. They’re pathetic.

“The chop is not racist – it’s bad ass. Braves fans should tell the left to take their cancel culture and shove it.”

A critic described the Braves’ bygone mascot choices as “questionable” and said that marketing decisions including handing out Tomahawks had been “extremely problematic”.

“The Atlanta Braves Chop is definitely racist,” they warned. “And this is coming from a lifelong Braves fan.

The Atlanta Braves Chop is definitely racist. And this is coming from a lifelong Braves fan. It took me quite some time to understand what makes it racist though. I had to look up what white people did in Seminole territory to understand why.Interesting thing about the chop is…

It doesnt take much to see how “Indians” and “Redskins” are bluntly racist. I don’t know that “Chief’s” and “Braves” are. I believe how the Braves chose to market it in the past have been extremely problematic.

“It took me quite some time to understand what makes it racist, though. I had to look up what white people did in Seminole territory [a native American area of Florida] to understand why.”

James R Floyd, the chief of a tribe driven from its homeland in present-day Georgia, told CNN in 2019 that the chop is “not an appropriate acknowledgment of tribal tradition or culture.”

“It reduces Native Americans to a caricature and minimizes the contributions of Native peoples as equal citizens and human beings,” he added.

Commissioner Rob Manfred says the Native Americans in the Atlanta Braves’ region are essentially OK with the Braves. Even if that were true, does #MLB have an obligation to be respectful to all Native Americans? Many, after all, think the Braves’ perpetuate racist stereotypes. pic.twitter.com/rMw0srXp0S

The Braves could follow the lead of the Cleveland Indians, who announced in July that they would be changing their names to the Guardians at the end of this season.

MLB Commissioner Rob Manfred, though, has backed the team. “In Atlanta, they’ve done a great job with the Native Americans.

“The Native Americans are the most important group to decide whether it’s appropriate or not, and they have been unwaveringly supportive of the team.

“We don’t market our game on a nationwide basis. Ours is an everyday game; we’ve got to sell tickets every single day to the fans in that market.

“There are all sorts of differences – among the clubs, among the regions – as to how the game is marketed.

“I don’t know how every Native American group around the country feels. I am 100% certain that the Braves understand how the Native American community in their region believes, and that they’ve acted in accordance with them.”

‘Cancel culture at work!’ Trump shares his surprise amid reports Cleveland Indians to drop their name after 105yrs

Why insist on RTPCR test report to approve requisition for…

UP govt to invoke NSA against accused in Lakhimpur Kheri…