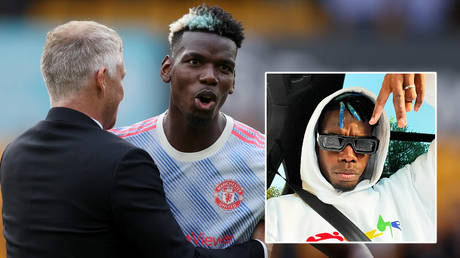 Paul Pogba has shown his disdain for a tabloid report in England claiming he shunned Man United boss Ole Gunnar Solskjaer on one of the worst days of their careers – Sunday’s 5-0 defeat to bitter rivals Liverpool.

Four days after United’s thrashing at home to the rampant Reds – a mauling that was unprecedented in the recent history of the 20-time champions – a story in the UK has sensationally claimed that pivotal player Pogba did not talk to his beleaguered boss after the game.

The account claims that Pogba apologized to his teammates for a calamitous cameo after he was introduced by Solskjaer at half-time in a bid to ensure United’s embarrassment did not worsen, with the out-of-form side trailing 4-0 at the break.

Rather than a rescue act, Pogba swiftly gave the ball away as part of the move that allowed Liverpool hitman Mohamed Salah to complete a hat-trick at Old Trafford and leave United facing one of the widest defeats in their history.

Pogba’s misery was then completed in self-inflicted style when the 2018 World Cup winner was sent off ten minutes later for an appalling challenge on Naby Keita that managed the impressive feat of making a dismal day significantly worse for United.

Solskjaer has “lost the backing of his senior stars” – who include the likes of Pogba, Cristiano Ronaldo and England defender Harry Maguire, the club captain – after a dreadful period that has also caused Pogba to halt talks on extending his deal beyond the end of this season, according to the report.

Pogba, though, has reacted by personally dismissing the story ahead of what is expected to be a make-or-break set of fixtures for United.

“Fake news,” said the club record signing, accompanying a shot of the story headline with a graphic of those words, as well as the song ‘Here we go Again’ by Arethra Franklin on Instagram, where the midfield superstar has almost 50 million followers.

He then elaborated: “[The] tabloid press once again wants to create [a] polemic with 100% fake news.

‘I am APPALLED’: Furious Pogba promises LAWSUIT over report that Macron ‘Islamist terrorism’ remarks had made him QUIT France duty

“Big lies to make headlines. Journalists who use my name to be seen when there is nothing to see.

“The only reason I address this BS is out of respect to my coach, club and fans to send a clear message: the less you read these people, the better you are. They have no shame and will just say anything with no basis at all.”

This is not the first time the outspoken social media favorite has voiced his fury at the outlet: in October 2020, Pogba said The Sun was guilty of “unacceptable fake news” and claimed he had launched a lawsuit after it ran a story suggesting he had quit international duty over remarks about Islam made by French president Emmanuel Macron.

Well until he signs a new deal, then yeah, time is running out for him here.

Another responded: “Well until he signs a new deal, then yeah, time is running out for him here.”

Others told Pogba that they believe Solskjaer, who has overseen a current four-match winless run in the Premier League including three defeats, has protected the former Juventus star.

tag also to me, because I’ve never said anything 😂 only that there’s no decision, weeks ago and now too.

Transfer guru Fabrizio Romano was bizarrely keen for Pogba to recognize him. “Tag also to me, because I’ve never said anything – only that there’s no decision, weeks ago and now too,” the oracular source for millions of fans begged.

Pogba’s three-match ban following the straight red card he received for his shameful challenge means he will not be seen in league action again for more than a month.

Solskjaer can ill afford to be without one of his key players during an unforgiving run that includes trips to Tottenham and Watford and the visit of arch-rivals and reigning Premier League champions Manchester City.

The United legend is the runaway favorite to be the next manager sacked in the English top flight – meaning it will be something of a surprise if he is still in charge when Pogba returns to domestic action, regardless of any disputed internal rifts.

Delhi schools to reopen for all classes from November 1

‘I Ran For My Life’, Nushrratt Bharuccha Recalls When A Ghost Haunted Her During A Shoot

Ammy Virk, who will be seen in sports drama 83, says the film is sure to strike a chord with a cricket-loving nation

Daniel Radcliffe Reveals Having A ‘Very Strange’ Relationship With Robert Pattinson: “Everyone Assumes We’re Kind Of…

When Tom Hardy Said He Would Have Sold His Mother For Crack While Opening Up About His Drug Addiction: “I Was A Shameful…