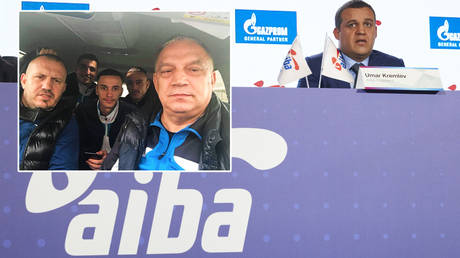 Kosovo’s ministry for sport has called for Serbia to be punished after claiming that their boxing team was told to remove their Kosovo emblems to gain entry to Belgrade for the AIBA World Boxing Championships.

The Kosovo Olympic Committee claimed that their three-man amateur boxing team was denied entry to Serbia by border guards on two occasions ahead of the amateur World Championships taking place in the Serbian capital until November 6.

They announced that they weren’t permitted entry while wearing Kosovo emblems on their attire – and said they had been denied entry a second time even after they had removed the symbols.

“Serbia’s refusal of entry for Kosovar boxers for the 2021 World Boxing Championships is a serious and blatant violation of basic international principles in sports, and a breach of Kosovar athletes’ fundamental rights by the event organizers acting under the orders of the Serbian government,” said Hajrulla Ceku, the Minister of Culture, Youth and Sport for the Republic of Kosovo.

Serbia does not recognize Kosovo’s self-declaration of independence in 2008, and considers the territory as a Serbian province.

However, the International Olympic Committee (IOC) and AIBA International Boxing Association have both recognized Kosovo’s independence – in sporting terms, at least – since 2014.

“The government of Kosovo calls on the AIBA and IOC to penalize the event organizers in Serbia and urgently calls on the EU to condemn Serbia for this major transgression against our athletes and sports everywhere,” Ceku continued, later adding that an internal meeting would be taking place to “offer concrete recommendations for action against Serbian parallel sports structures”.

Serbia should show its strength in the boxing ring not at the border.

Their decision to deny entry to our athletes for the World Boxing Championships 2021 is a violation of int. norms on sport.

I call on EU & int. community to condemn this violation and discriminatory action.

The IOC had previously stated its opposition to Belgrade being awarded hosting rights for the tournament, and hit out at AIBA for failing to follow their recommendations – which come after the IOC removed AIBA from its involvement in Olympic qualifiers due to complaints about the body’s “governance, finance, and ethical issues.”

For its part, AIBA released a statement in which it said that all athletes should be eligible to compete regardless of their nationality and pledged to hold talks with the Serbian Boxing Federation.

“AIBA aims to provide a welcoming home for every boxer, and the world of boxing has no borders,” it said. “Sport is intended to unite people and should be free of national politics.”

The EU, meanwhile, has backed Kosovo in the row and demanded that Serbia roll out the red carpet.

“The EU fully supports the International Boxing Association in its expectation that the Kosovo Boxing Federation’s delegation will be treated no differently than the delegation of any other member of the association and to enable Kosovo to participate on an equal basis,” EU foreign policy spokesman Peter Stano said.

He added that situations such as this “are essential for building mutual understanding.”

These Beauty Products Actually Exceed Their Hype, and Yeah,…

Fifth Test: England bowled out for 332 in first innings

KSCA XI hit back after getting bowled out for 184