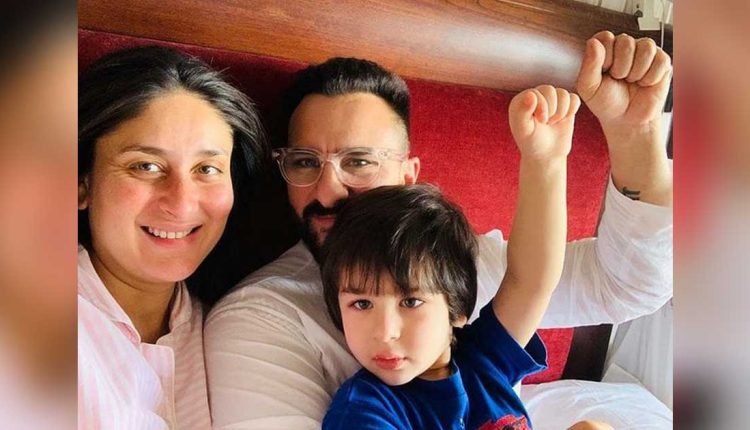 Kareena Kapoor Khan was spotted yesterday at the private airport in Mumbai along with her husband Saif Ali Khan and sons Taimur and Jehangir. In a new interview, Kareena has revealed that she’s very particular and finicky about Taimur’s bedtime whereas father Saif is a little lenient towards it. Scroll below to read the scoop.

Taimur has been attending online classes amid the global pandemic and Kareena Kapoor Khan in a conversation with Mansi Zaveri on an episode of Raising Parents revealed that she ensures that her son goes to bed at a reasonable time whereas husband Saif Ali Khan is a little ‘lenient’ when it comes to his bedtime.

Kareena Kapoor Khan said, “The only thing that I think I am very finicky about is bedtime. I think that is something I’m not ready to push as much. I get annoyed because Saif sometimes, with the lockdown, he’s like ‘No, no, let him stay up, let’s watch a movie. Let’s watch Avengers, now they’re going through that phase or let’s watch an action film, and I’m like, ‘No, no, no, he has school tomorrow and it’s online’. So that is something Saif is lenient (with), he’s like, ‘Nahi, nahi, nahi, I haven’t seen him, let him stay up half an hour more.’ I’m like, ‘No, he has to go to bed’ because obviously, timings are haywire. And I hope, now with Jeh, I’m going to try and control that. I want the kids to get like 12 hours of sleep.”

The Tashan actress also revealed how she balances out her schedule with her two children and divides her time equally and said, “I divide my time well. Like I know Taimur needs me at this point of time. You know I am lucky that he now wakes up later than Jeh so I know I have to be with Jeh for that hour while he has his breakfast and then once Jeh’s breakfast is done I know Taimur’s time is you know coming in. So I just balance it out. The idea is to not have too much pressure on like doing things. The idea is to involve children to take part in your daily life. It’s not like we have to do this and we have to do that. We are not those kind of parents.”

For more updates, stick to Koimoi.

Must Read: Nayanthara Is Still A Part Of Shah Rukh Khan’s Film With Atlee, No Effect Of Aryan Khan Case On It

BJP lost 3 state elections but we are not defeated: Shah