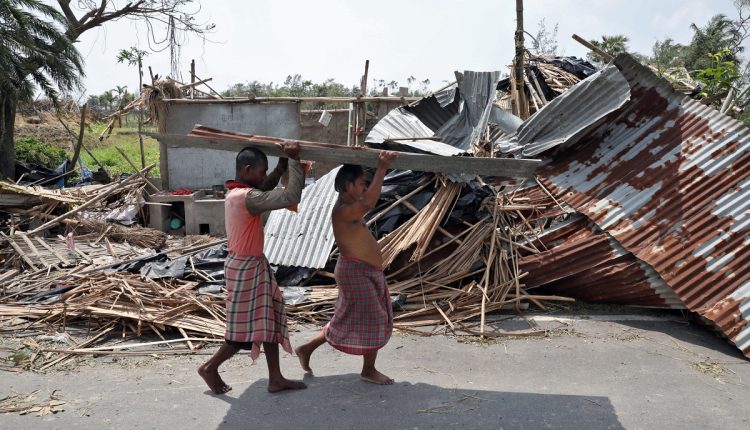 Residents carry tin sheets salvaged from the rubble of a damaged house in the aftermath of Cyclone Amphan, in West Bengal, May 22, 2020. Photo: Reuters/Rupak De Chowdhuri

United Nations: India is estimated to have suffered an average annual loss of about $87 billion from extreme weather events such as tropical cyclones, floods and droughts, a report by the United Nations weather agency said.

The State of the Climate in Asia 2020 report by the World Meteorological Organisation (WMO), released on Tuesday, said that extreme weather and climate change impacts across Asia in 2020 caused the loss of life of thousands of people, displaced millions of others and cost hundreds of billions of dollars, while wreaking a heavy toll on infrastructure and ecosystems.

Sustainable development is threatened, with food and water insecurity, health risks and environmental degradation on the rise, the new multi-agency report coordinated by the WMO said.

China, India and Japan experienced the majority of this loss: approximately $238 billion in China, $87 billion in India and $83 billion in Japan, it said.

The report said that in 2020, floods and storms affected approximately 50 million people including over 5,000 lives lost.

As regards damage, India and China suffered the most in absolute value from extreme events: $26.3 billion and $23.1 billion, respectively, the report said.

It said that for some countries the impact was significant when translated into percentage of gross domestic product (GDP), which was the case for India, Iran, Bangladesh and Pakistan, where damages exceed 0.5% of GDP.

The report noted that Cyclone Amphan, one of the strongest cyclones ever recorded, hit densely populated coastal areas in Bangladesh and India during the rapid spread of COVID-19 in May 2020.

In India, in West Bengal, 13.6 million people were affected and damage amounted to approximately $14 billion due to the cyclone.

While many returned relatively soon afterwards, damage to more than 2.8 million homes likely resulted in homelessness and prolonged displacement for many thousands.

Many displaced people did not have access to evacuation centres and were compelled to take shelter in tents or in the open air on embankments.

It is an exemplary case where the affected countries faced the dual challenge of tackling a pandemic and the impact of an extreme event.

The response to the impact of Amphan was made difficult owing to restrictions imposed during the pandemic and the disruption of supply chains, the report said.

The report said that climate and weather events had major and diverse impacts on population movements and on the vulnerability of people on the move in Asia throughout 2020.

Much of the disaster-related displacement recorded globally in 2020 took place in China, Bangladesh and India, which recorded some of the highest figures (about 4 to 5 million new displacements each).

Refugees, internally displaced people and migrants in Asia are often among those most vulnerable to climate-related and weather-related hazards. The overwhelming majority of weather-related displacements in Asia take place within national borders, though cross-border movements also occur, it said.

Intense cyclones, monsoon rains and floods hit highly exposed and densely populated areas in South Asia and East Asia and led to the displacement of millions of people in China, Bangladesh, India, Japan, Pakistan, Nepal and Vietnam, the report added.

Combined, these impacts take a significant toll on long term sustainable development, and progress toward the UN 2030 Agenda and Sustainable Development Goals in particular, he said.

TSiPass one of the best in country: CII

Authorities at loss of words over German national living at…