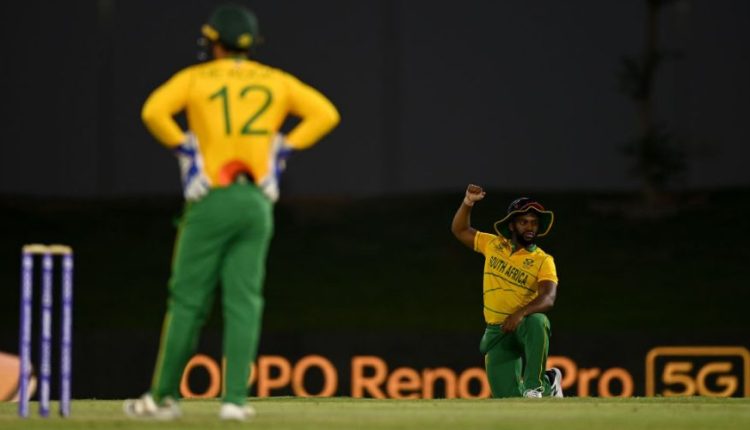 South Africa’s Quinton de Kock’s decision to make himself unavailable for their group game against West Indies continues to draw opinions and reactions from all ends of the spectrum. A South African sports journalist has sought to explain the reasons behind his decision.

De Kock’s decision to make himself unavailable for a crucial group match, right after CSA had directed all players to take the knee as a “united stance against racism”, didn’t sit well with many.

CSA released a statement mentioning that they had “noted” Quinton de Kock’s decision to not take the knee, and would consider future steps after receiving a report from the team management.

Cricket South Africa (CSA) has noted the personal decision by South African wicketkeeper Quinton de Kock not to “take the knee” ahead of Tuesday’s game against the West Indies.

When asked about de Kock’s decision, South African captain Temba Bavuma said: “When the news hit us it did kind of take us back as a team. A guy like Quinny, he obviously plays an integral role within the team, not just with the bat, but as a senior player. But with that, Klaasen coming in there was an opportunity for him. It was another game of cricket that we had to play for our country and we had to live up to that.”

Speaking on the development Lungani Zama, a Johannesburg-based journalist, told SEN Breakfast that to his knowledge, “lack of choice” among players influenced Quinton de Kock’s decision.

“Given the amount of time South Africa have had to take a definitive, collective stance on it and then they’ve almost made up the rule in the middle of a tournament ahead of a must-win game. The previous board had said to them that every player is allowed to express themselves in whichever way they deem fit, to suddenly change that on the eve of such an important match…

“I’ll qualify it by saying Quinton de Kock, if you’re asking me if he’s racist or against Black Lives Matter, I’ll unequivocally say no because I know him personally. I know the work that he’s done to improve the lives and experiences of black players and black people around him for years and years, long before Black Lives Matter was a trend on social media.”

Australian legend Adam Gilchrist later spoke on SEN’s Whateley, adding that while the gesture was “worth doing”, it was bit of a “wrestle” when discussing the South African keeper’s perspective, “For Quinton, it’s about being told he has to do something when he doesn’t necessarily feel he needs to do it, that it’s become a bit tokenistic.”

It would be interesting to see which way the conversation turns before South Africa play their T20 World Cup encounter on Saturday.

The post ‘If you’re asking me if he is racist or against Black Lives Matter, I’ll unequivocally say no’ – SA journalist comes to Quinton de Kock’s defence appeared first on Wisden.

How did the English players fare in the Abu Dhabi T10 League?