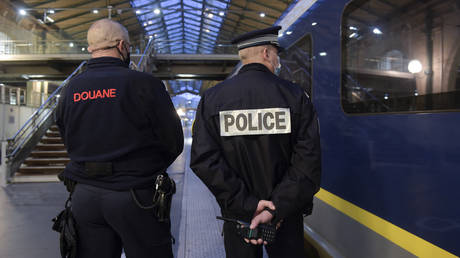 Gare du Nord station in central Paris, France has been evacuated due to a potential bomb threat, and train travel from the hub has been suspended. Police are investigating what is believed to be unattended luggage.

Hundreds of people were forced to stand outside the station on Wednesday after police ordered its evacuation.

Traffic to and from the area is interrupted, as unverified footage appears to show the station emptying out.

Living in interesting times as always. Gare du Nord has been evacuated due to an unattended baggage. Armed police are everywhere. Walking chaperoned through the empty Eurostar platform was eerie.#garedunordevacuée pic.twitter.com/DovIwOqOg7

We missed our Eurostar due to SNCF delay.
Got our new tickets.
Through security.
Then:
All of gare du nord evacuated.
Now on pavement with 1000s of others.
Bomb squad here & suited up.
I thought our first holiday W/O kids might go smoother.#garedunordevavuee pic.twitter.com/s5viUrrBZL

Transport Express Regional (TER) tweeted that transport from the station has been interrupted, while the company running the Paris Metro specified that trains were not running in either direction between Paris Gare de Lyon and Paris Nord.

The Paris Metro group said traffic was expected to resume at 5pm local time (3pm GMT) and confirmed that the incident was related to an item of unattended luggage.

The station, one of the largest in Paris, also receives the Eurostar train from London and serves Charles de Gaulle Airport.

Photos and footage from outside the station show large crowds waiting on the streets of the captial’s 10th arrondissement for the all-clear. Some on Twitter confirmed that the bomb squad had arrived at the station.

Savita stars as India beat Chile in HWL Round 2 final