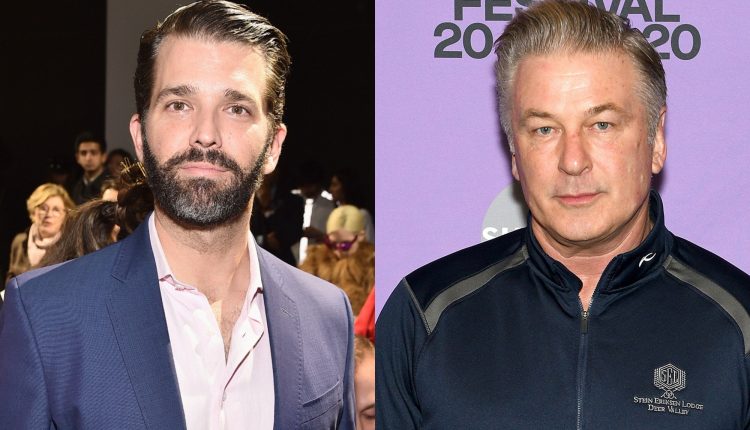 Donald Trump Jr. received some massive backlash following what happened regarding Alec Baldwin. Check out the news coming from The Shade Room.
TSR notes that ‘while many are still processing the horrible tragedy that occurred on the set of #AlecBaldwin’s upcoming film “Rust” that claimed the life of #HalynaHutchins—practically no one could have predicted what #DonaldTrumpJr. would do in response. Just days after Halyna Hutchins’ death after accidentally being shot by Alec Baldwin, Donald Trump Jr. is now selling T-shirts with a message stating that “Alec Baldwin Kills People” and social media is outraged.’
TSR also said that ‘Although most people have used the last few days to pay their respects and celebrate the life of Halyna Hutchins, Donald Trump Jr. took the opportunity to use her death as a way to get back at long-time rival Alec Baldwin. @NYDailyNews reports, Don Jr. is now selling T-shirts mocking Alec’s accidental shooting of Hutchins with a message that reads, “Guns Don’t Kill People, Alec Baldwin Kills People”—and if you’re wondering if feels any regret following the backlash, his response makes it clear.’
‘After being dragged immediately once he advertised the shirt, Donald Trump Jr. fiercely responded to the backlash, saying “Screw all the sanctimony I’m seeing out there. If the shoe was on the other foot Alex Baldwin would literally be the first person p*ssing on everybody’s grave trying to make a point. F**k him!” You may recall that the Trump family and Alec Baldwin have been at odds for years,’ TSR notes.

A post shared by The Shade Room (@theshaderoom)
Someone said, ‘All I see Is a Trump being a prick, I mean a Trump.. tasteless as usual…..’ and a commente rposted this: ‘This whole family lacks class, tact, & basic human decency. Sheesh, karmic retribution needs to show up ASAP for these folks.’
Someone else posted: ‘That whole trump family needs a lot of psychological help,’ and a commenter said: ‘And here go his followers with “wEll iTs tRuEe” … I swear theyll follow this family straight thru the gates of hell.’
Stay tuned for more news.

‘You are helping us move forward’: Barca ace Pique praises Josh Cavallo as Aussie becomes first male pro to ‘come out’ as gay

Song of the day for ‘Stree’ team