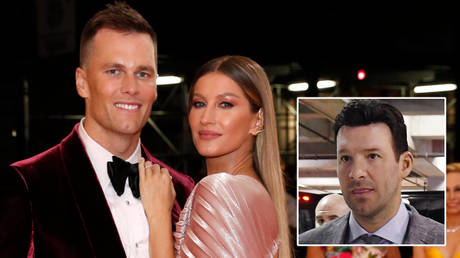 NFL fans fear a popular pundit could become the latest casualty of cancel culture after critics rushed to express their outrage for a curious joke he made about top model Gisele Bundchen going on a date.

Former Dallas Cowboys legend Tony Romo has been savaged for a throwaway quip he made centering on the fan who claimed a Tom Brady touchdown ball, thrown by the NFL legend after he did the business for the 600th time in his career.

Wide receiver Mike Evans unwittingly gave the ball to a supporter, and analyst Romo watched a member of Brady’s team, the Tampa Bay Buccaneers, negotiate with the lucky recipient in the hope of reclaiming the landmark potential piece of memorabilia.

Speaking on the CBS broadcast in the US, Romo imagined the fan asking for a personal audience with stunning Bundchen, who has been married to Brady for more than 12 years and is one of the world’s best-known models, in return for the ball.

Tony Romo said he would want a date with Gisele to give up Tom Brady’s 600th TD ball.pic.twitter.com/ahsmh7Zeox

Romo then gave his impersonation of the official as he said: “Ok, Tom will do it. One time, you got it.”

A predictable round of fury followed the sequence, with some claiming Romo had been suggesting Bundchen would be “pimped out” by Brady and others calling the broadcaster “f*cking horrible”.

Tony Romo thinks Tom Brady is willing to pimp out Gisele to a random fan for a football.

“It’s a super-weird thing for Romo to say and totally unnecessary but didn’t anyone see [films involving negotiations for romance] ‘Indecent Proposal’ or ‘Honeymoon in Vegas’?

“Where was all the backlash back then? Hopefully this dumb comment doesn’t cancel him.”

Others expressed their fatigue with people professing offence at the slightest of apparent opportunities, calling the negative reaction “nonsense”.

“Cancel culture to the highest extent,” rued one, reacting to headlines that could place Romo under scrutiny.

Tony Romo is just fucking horrible. I don’t see what people see in this guy.

A radio host added: “We are offended by everything now. Everything. You can’t call a beautiful person beautiful anymore.

“And someone who is a friend can’t say something about another friend in jest. What has our society become?”

Now 41, Romo knows about being a quarterback in a high-profile relationship after spending almost two years with pop star pin-up Jessica Simpson between 2007 and 2009.

Salman Khan’s Antim Is Releasing In Theatres Despite A Pre-Decided OTT Deal With Zee5, Here’s How Bhai Made This Happened!