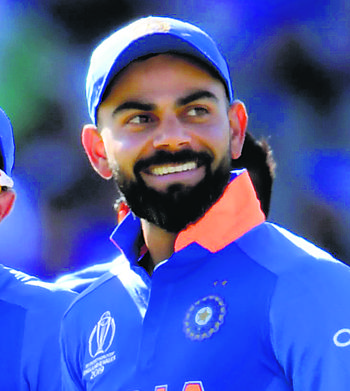 India skipper Virat Kohli has conceded that the “high-intensity” IPL, which concluded here recently, did take a toll on the players and the week-long break before the next game will do his side a world of good.

Also read: Not the end of the world: T20 is a lottery, don’t let defeat upset you

Compared to the enthusiasm shown by the Indian players for their respective IPL teams recently, Kohli’s boys looked jaded and listless against Pakistan. India’s players displayed had a tired body language, while Pakistan’s players seemed to treat it like the match of a lifetime.

Asked about the break before the next match, Kohli said: “I think it works really well for us from all point of views. Knowing that we have played a full-fledged season already, we played the IPL, which is very high octane by itself in testing conditions here in the UAE, and then we come into the World Cup. So for us these big breaks are definitely something that’s going to help us as a team to be in the prime physical condition that we need to be to play this high-intensity tournament.”

Talking about the defeat, Kohli said Pakistan winning the toss proved to be crucial. “The more dew came in towards the second half of the Pakistan innings, 10 overs onwards, and the wicket will rotate strike,” Kohli said. “We could not even get dot balls in because the pitch was obviously providing a big pace for the batsman to work with. The slower balls were not holding up as much. These small little factors, as I said, it did make a massive difference, and as a team you need to understand what was the reality of the situation out there in the middlehellip;” — IANS

SHARJAH: Afghanistan appeared unperturbed by their uncertain future in international cricket as Mohammad Nabi’s men dished out a 130-run shellacking to Scotland in Group II at the T20 World Cup today. Afghanistan’s muscular top-order fired them to an imposing 190/4 in their opening Super 12 stage match. Spin duo Mujeeb Ur Rahman (5/20) and Rashid Khan (4/9) then combined to demolish Scotland for 60 in 10.2 overs to maintain Afghanistan’s 100% victory record against them in this format. “This was our plan, to bat first and put a big score,” Nabi said after their biggest T20 victory in terms of runs. “Everyone knows Rashid and Mujeeb are among the best in the world.” Reuters

Won’t be easy or harsh: Lisa on role as…