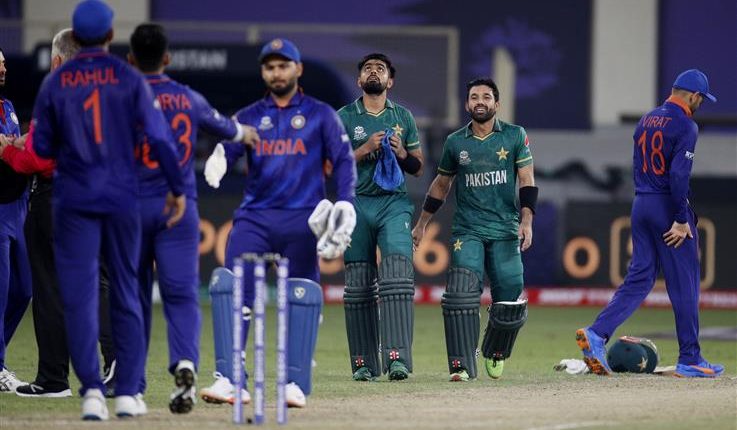 Former Australia opener Matthew Hayden has hailed the “sporting brotherhood” displayed by arch-rivals India and Pakistan after their T20 World Cup clash, saying the players have set an example with their conduct.

India lost to Pakistan for the first time in an ICC World Cup, going down by 10 wickets in the opening Super 12 game of the T20 World Cup on Sunday.

However, one of the most endearing images from the match was of the Indian captain hugging winning team hero Mohammed Rizwan.

“The thing that inspired me the most out of the performance was the fantastic sporting brotherhood,” Hayden, who is currently working as a batting consultant with the Pakistan T20 squad, said in a video message.

Ever since the 2008 Mumbai terror attacks in which hundreds were killed, India has largely avoided bilateral cricket ties with Pakistan, competing only in ICC events.

Hayden said Pakistan and Indian players set a good example “of how we should treat each other as people” after coming together at the end of the match.

“That’s the role of sport, so it’s beautiful to see those moments where MS Dhoni is holding court with a few of the (Pakistan) players and Virat Kohli and (Rizwan), you know, in brotherhood, joining hands after there were heated battles in the middle.”

Hayden, who was working as a commentator in the Indian Premier League, was appointed as a batting consultant by the Pakistan Cricket Board before the World Cup got underway on October 17.

The 49-year-old was also impressed with pacer Shaheen Shah Afridi’s opening spell where he snapped the wickets of openers Rohit Sharma and KL Rahul.

“Pakistan has velocity in abundance, not just here but also back home that aren’t celebrating in this World Cup,” he said.

“Shaheen really is that one leader within the bowling group … nothing beats velocity, mixed up with some skill.” —PTI

Will be a close match against Colombia: Germany U-17 coach

Protests held outside Chinese consulate in Vancouver over…