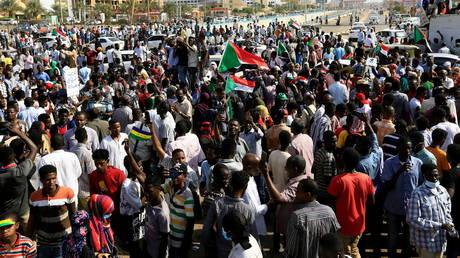 All flights into and out of Sudan’s capital Khartoum have been suspended until October 30, its airport has announced. The move came as three Sudanese ambassadors announced their defection in the wake of a military coup.

On Monday, after weeks of tension between Sudan’s military and government, the head of the Sovereign Council General Abdel Fattah al-Burhan announced the dissolution of both the council and the transitional government, declaring a state of emergency. News of the apparent military coup was immediately followed by mass protests in the nation’s capital Khartoum and other cities.

Speaking at a press conference on Tuesday, al-Burhan said he was keeping Prime Minister Abdalla Hamdok at his own house and he is “in good health.”

In a message published on Tuesday on the official Facebook page of Sudan’s Ministry of Information, the diplomatic trio said they “condemn in the strongest terms the brutal military coup,” call on “peace-loving countries and peoples” to reject it, and welcome “the strong international stances” against the upheaval.

The statement proceeded to declare the embassies in France, Belgium and Switzerland “as embassies for the Sudanese people and their revolution.”

The military coup has been condemned by UN Secretary-General Antonio Guterres and many world leaders who called for the swift release of the prime minister and other senior Sudanese officials detained by the military.

I condemn the ongoing military coup in Sudan. Prime Minister Hamdok & all other officials must be released immediately. There must be full respect for the constitutional charter to protect the hard-won political transition. The UN will continue to stand with the people of Sudan.