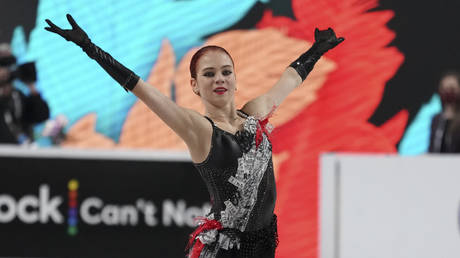 Despite being hampered by an apparent foot injury which restricted her to just one quad in her routine, Russia’s Alexandra Trusova still made light work of claiming gold at the Skate America Grand Prix in Las Vegas on Sunday.

Trusova, 17, ended with a total of 232.7 points after her free skate, putting her more than 15 points ahead of compatriot Daria Usacheva – the 15-year-old star who was making her senior Grand Prix debut.

📺 Jumping for gold! 🏆 Alexandra Trusova opens her program with a Quad Lutz and wins the Women‘s Event of the ISU GP Skate America 2021 with plenty of margin to spare!

Trusova is renowned for her quad jumps – landing five in a single free skate routine at a home event in Russia at the start of this season.

However, injury concerns limited her to just one quad – a lutz – on Sunday in Vegas as she skated to the soundtrack of Disney’s ‘Cruella’ movie.

“We reduced the complexity of the content to one quarter. This is an easy option. I’m glad I managed to skate cleanly, but I want to do more quads,” said the youngster after picking up a third senior Grand Prix win of her career.

“I’m not in my best shape now. I was in the best shape at the test skates in Chelyabinsk. I’ll try to get [that shape] back and qualify for the Olympics.”

🏆 Medalists in the Women’s Event at the ISU GP Skate America 2021:

Trusova, who later donned a Wonder Woman-style outfit for her exhibition routine, added: “Now I’ll have a few days off, and then return to training. I want to complicate the content [of my programs].

“Over the past couple of years, I have changed a lot – both internally and externally. I got acquainted with different coaching approaches, gained a lot of experience. I think every season I get stronger.”

💪 Having sustained an injury, she performed a breathtaking #quadruple jump and… won!

🎉Sasha, you are our hero! pic.twitter.com/TU6IMYlFFJ

There is set to be fierce competition for places on the Russian Olympic Committee team which heads to the Winter Games in February, with just three spots up for grabs.

Elsewhere, contenders include the likes of Anna Shcherbakova, Elizaveta Tuktamysheva, and the first-year senior sensation Kamila Valiyeva, among others.

Skate America was the opening Grand Prix of the season, with the next stage being Skate Canada from October 29 to 31.

A host of Russian skaters had been sweating on receiving visas for the event, but it was confirmed on Monday by the Russian Figure Skating Federation (RFSF) that women’s stars including Tuktamysheva, Kostornaia and Valiyeva had finally got them and would be flying out to Canada.

The last eight women’s Grand Prix titles have been claimed by Russians, who won every event in the season before the pandemic disrupted competitions last year.

‘A fan is not a criminal’: Why thousands of Russians are walking out of football…

From Katrina To Deepika: Bollywood Actresses Who Earn More Than Their Actor Partners

After all the turmoil, Sri Lanka may have found light at the end of the tunnel

Quiz! Every cricketer to play for Australia in the men’s Ashes in the 21st century

Antim Fame Aayush Sharma On Being A Part Of Ranbir Kapoor, Deepika Padukone’s YJHD: “For The First Time I Saw…”

Katrina Kaif & Vicky Kaushal’s Wedding Mandap To Be A Glass Gazebo & The Groom To Enter With 7 White Horses?

Mellisa McCarthy gets star on Hollywood Walk of Fame

IOA complains of no information on COVID vaccination from…