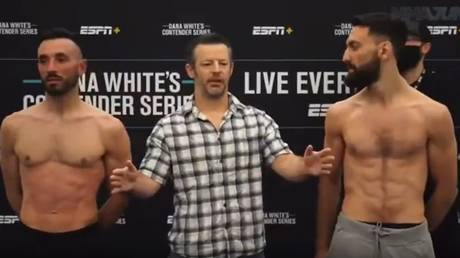 Fight fans have hit out at an ugly moment during a UFC weigh-in on Monday evening after Oron Kahlon, who missed weight for his fight, appeared to refer to Afghan opponent Javid Basharat as a ‘terrorist’ during a heated staredown.

The pair of UFC prospects are hoping to catch the eye of Dana White ahead of Tuesday’s ‘Contender Series’ match-up between the two bantamweights as part of the company’s drive to identify new talent capable of competing on the global stage – but Kahlon may have gone one step too far after he appeared to be overheard referring to Basharat as a ‘terrorist’.

Footage of the dramatic moment was captured on social media and has prompted widespread scorn towards Kahlon, who is of Israeli descent. The slur was noted when the two were posing for photographs alongside UFC official Sean Shelby – and is even more remarkable given that it was Kahlon who missed weight for their fight.

Oron Kahlon (left) missed weight (3lbs too heavy) for his scheduled fight tomorrow at #DWCS. He will be fined 20% of his purse.

Javid Basharat wasn’t happy about it and didn’t shake hands with Kahlon. Kahlon called him a terrorist soon after…. pic.twitter.com/N5pflxW2wU

To his credit, Basharat opted to not escalate the situation further after opting not to shake Kahlon’s hand and chose instead to simply point at Kahlon and address the situation later on social media.

“This p*ssy wanted a way out by missing weight by 3 pounds,” wrote Basharat on his Instagram profile along with footage of the weigh-in.

“I told him I’m gonna still whoop his arse, he then called me a terrorist wanted a reaction again he wanted a way out. Unlucky for him I ain’t going nowhere!

“I’m waiting to see him tomorrow. Booooo [Oron Kahlon] guys, let him have it.”

no place for that in this sport

Kahlon just ruining his MMA Career in one day

“Disgusting,” wrote MMA reporter Shaun Al-Shatti in response to the footage, which was also noted by his colleague Luke Thomas as being “utterly repulsive“.

“No place for that in this sport,” added another fan, while a third forecast that this clip may well be the entirely of Kahlon’s 15 minutes of fame in the UFC.

“Kahlon just ruining his MMA Career in one day,” they wrote.

The pre-fight histrionics between the two warring bantamweights seems to have overshadowed what was expected to be a thrilling encounter between the two undefeated prospects – with Kahlon a perfect 12-0 in his career thus far, while Basharat has posted a 10-0 record to date.

Time will tell how the UFC brass react to the latest controversial moment at a weigh-in hosted by them but as some fans are speculating, Oron Kahlon’s time at MMA’s top table may now be very temporary.

‘There was blood everywhere’: Brave teenage jiu-jitsu champion downs street thug who bit his ear in attack in England (VIDEO)

Portugal to be India’s partner country at Technology…