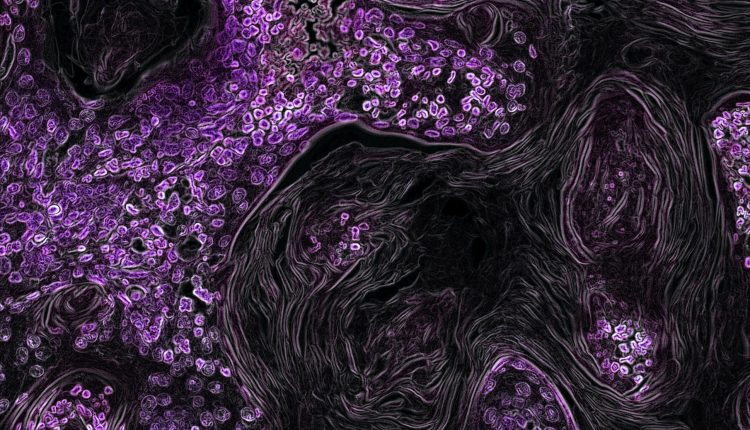 In the history of life on Earth, the three examples of widespread transmissible cancer that we know of all appear to involve human interference in some way.
A recent study discovered genetically identical cancer cells in French and Chilean mussels – meaning a transmissible cancer has made its way halfway around the planet.
For Tasmanian devils, “normal” social behaviour often involves severe bite wounds, which can transfer cancer cells to other individuals.

It’s like a bad zombie movie: A growling individual lunges at you, mouth open, and bites off a chunk of your face. If you are a Tasmanian devil, this is just a regular part of your everyday social life. Aggressive contact like this is routine for Tasmanian devils. But it comes with more risks than just a painful bite wound: The carnivorous marsupials are now endangered because of a transmissible cancer, called devil facial tumor disease, that transmits through fighting and biting.

We like to think that the apocalypse is a far-off, highly unlikely event; it is the stuff of Hollywood, with stories written and produced for our entertainment. But apocalypses are happening all around us – just not always to us. This is particularly true for the species facing transmissible cancer. In addition to the Tasmanian devil, that includes several species of bivalves (e.g., clams and mussels) and our beloved domestic dogs.

In the history of life on Earth, the three examples of widespread transmissible cancer that we know of all appear to involve human interference in one way or another. This growing epidemic of contagious cancer in several species could be a harbinger of a new ecological order, or lack thereof. Usually, organisms’ cells keep to themselves, staying inside the organism they originated from or dying and shedding in an orderly way. The increasing incidence of contagious cancers is a wake-up call to the massive changes we have wreaked on global ecosystems – and an invitation for us to acknowledge and do something about the ecological apocalypses that are currently underway on our planet.

Cancer is one of those things that organisms evolved to be able to deal with and suppress pretty damn well. Over about 500 million years – since the origins of multicellularity – evolution has been selecting for organisms that can keep cancer at bay. Our bodies are constantly monitoring for aberrant cells and regulating cellular behavior so that we don’t succumb to cancer. Occasionally these systems for suppressing cancer do fail, leading to the emergence and spread of cancer within an organism. Transmissible cancer happens when cancer cells evolve and gain the ability to spread to new individuals, a biologically rare event and something that almost never happens in humans.

When it happens in any organism, it is often because of a lack of genetic diversity among individuals in the population in addition to close contact that allows the transmission of cells (e.g., through biting or intercourse). Basically, the other individuals in the population become like a genetically homogenous extension of the first individual, with cells spreading and taking hold, creating a sort of multi-individual metastatic monster.

Shellfish – including clams, mussels and cockles – are facing a pandemic of contagious cancer spreading across the Atlantic and also into the Pacific. A recent study discovered genetically identical contagious cancer cells in French and Chilean mussels, showing that this transmissible cancer has made its way across thousands of kilometres by water. In some locations where the researchers looked, the infection rate was as high as 13 percent. Shellfish have also experienced massive die-offs in recent years, with up to 90 percent mortality in some cases. Michael Metzger, my friend and colleague who studies transmissible cancer in shellfish, tells me that these die-offs are most likely a result of contagious cancer spreading, though it is hard to prove in retrospect.

If you’re a shellfish fan like I am, you might be wondering if it’s still OK to eat those delicious mussels from your favorite brasserie. The simple answer is yes – the cancer cells from shellfish can’t spread to humans.

But they can spread readily to other shellfish that are of the same species. Shellfish have a way of life that makes them vulnerable to catching and transmitting contagious cancer: They are filter feeders, which means that cancer cells from one clam can make their way into the water and then get caught in the filters of other clams. Our ways of cultivating bivalves in massive, often genetically homogenous aquacultures may create prime conditions for the spread of transmissible cancers. Furthermore, the cancer was most likely spread by international shipping activities; mussels often grow on the sides of ships, and this would have made it possible for the transmissible cancer cells to get from one side of the equator to the other. (Mussels don’t grow in equatorial waters.)

Not only do these transmissible cancer cells spread from one clam to another; they are able to cross the species barrier as well – but only among closely related species – starting in one species of clam and ending in another species of clam. We still don’t know what the consequences will be for bivalve populations or the ecosystems they are embedded within.

Humans accidentally set the devils up for this bizarre problem. Tasmanian devils’ populations were decimated by European settlers in the 19th century, leading to a population bottleneck that left them genetically quite homogeneous (exacerbating the already low genetic diversity that is often an issue for island-living species). For a transmissible cancer cell in a population with low genetic diversity, potential new hosts can be very similar to the previous host, immunologically speaking, making it much easier for the transmissible cancer to take hold. Despite spontaneous regression in a few cases, the transmissible cancer is still a huge threat to vulnerable Tasmanian devil populations and is landing them on the endangered species list.

Domestic dogs make up another species that has low genetic diversity and is susceptible to transmissible cancer – specifically, canine transmissible venereal tumors. Like the Tasmanian devil cancer, this dog transmissible cancer spreads through close contact. In dogs, intercourse can sometimes result in wounding in the genital area. When dogs have sex, the male dog’s penis often becomes stuck inside the female dog for many minutes afterward; if the dogs try to separate during this time (or if humans try to separate them), this can result in wounding.

As with the Tasmanian devil cancer, this dog transmissible cancer can grow in these resulting wounds. Thankfully, dogs infected with the transmissible cancer do surprisingly well; the cure rate is about 90 percent with treatment. And many of these canine transmissible cancers spontaneously regress even without treatment, because the immune system starts to be able to “see” the previously immunologically invisible tumor as special cells called tumor-infiltrating lymphocytes get inside the tumor and uncloak it. And as with the Tasmanian devils, these canine cancers are likely our fault. Domestic dogs have low genetic diversity because of selective breeding by humans to create (often highly inbred) dog breeds.

How about us humans? Are we vulnerable to a contagious cancer apocalypse? In theory, but not really in practice. There are only very rare circumstances when it can happen, like when the immune system is compromised and/or there is high genetic similarity. Cancer has been transmitted during pregnancy (a time of immune suppression) from the foetus mother as well as from one twin to another inside the womb.

Transmissible cancers also sometimes happen as a result of organ transplants (but the risk of dying on the waiting list for an organ is much higher than the chance of getting cancer from an organ donor, so this miniscule risk is no reason to refuse an organ donation if you need one). Recipients of organ transplants have to take immunosuppressive drugs so they do not reject the transplanted organ. But these drugs lower the body’s defenses against foreign cells, which includes any cancer cells that may have been transplanted along with the new organ.

Transmissible cancers have also happened in freak accidents in medical and research settings when the skin (our most important immune organ) is breached, since this allows foreign cells access to the tissues of the body. The wound-healing environments can actually help these transmissible cancer cells get a foothold in the tissues of the new individual, because wounds are filled with growth factors and other features that create an environment that can encourage cancer cells to proliferate.

For example, during an operation to remove a sarcoma, a surgeon accidentally cut his left hand; five months later, there was a tumor growing there that was genetically confirmed to have originated with the patient. In another freak accident leading to transmission of cancer cells, a laboratory worker accidentally punctured herself with a needle containing colonic adenocarcinoma cells and developed a tumor. In both cases, the tumors were successfully removed.

We humans are mostly protected because our immune systems have many redundant layers of protections and we are reasonably genetically diverse. Also, there aren’t a lot of opportunities for cancer cells to transmit because we aren’t particularly aggressive or bitey.

But this doesn’t mean we can afford to ignore contagious cancers. The prospect of losing species to these cancers is just the tip of the metaphorical iceberg. Transmissible cancers in multiple species may suggest that we are pushing our ecological systems and the organisms within them to some sort of biological brink, where basic properties of individual organisms that we take for granted – like the continuity and unity of their cells – can break down. From a more selfish human perspective, understanding how and why these transmissible cancers evolve will help us to ensure they do not ever emerge in human populations. The zombie apocalypse may not be upon us – yet – but many other species are currently facing apocalyptic fates because of human activities.

What can we do to reduce the risk and burden from transmissible cancers as we move into the future? We can work to protect our ecosystems and preserve genetic diversity. Maybe we can even discourage zombie-like aggressive social behaviour (“Kumbaya,” anybody?) to make sure we stay not-bitey. And really, these are all great strategies for reducing the risk of apocalypse, zombie or otherwise, whether you’re a human, a clam or a face-biting marsupial.

The post Contagious Cancers in Animals Are a Warning to Humans appeared first on The Wire Science.

WHO to decide today on Covaxin approval

US seeks ‘in vain’ to divide Iranians: Khamenei