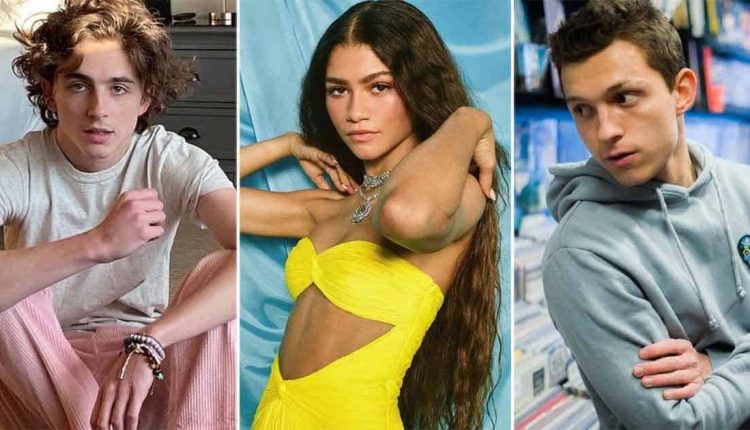 It’s no surprise that Zendaya and Tom Holland are some of the cutest couples in H-town. Their social media exchanges are enough to prove that. Added to that is the heart-melting friendship of Timothée Chalamet, who played a quiz with Zendaya and made her and all of us giggle.

Recently, Chalamet and his Dune co-star have been making a buzz all over social media and beyond due to the release of their sci-fi film. Directed by Denis Villeneuve, the film is based on the Frank Herbert book with the same name.

The two stars took a BFF quiz on BuzzFeed, where they answered several personal questions. One particular question that caught the fans attention was to name their “celebrity crush.” Timothée Chalamet quickly answered for Zendaya and said, “Easy, Tom Holland.” To this, the actress let out a cute giggle while making fans gleam with joy.

While the Call Me By Your Name actor was quick to answer, Zendaya didn’t know who Chalamet’s celebrity crush is. “Maybe that’s a secret on purpose,” she said while jokingly.

Recently, Holland had the fans in tears after he shared a photo of the actress on Instagram. The picture was from the Dune premiere in London and was captioned “Dune” with a heart-eyes emoji. The Spider-Man: No Way Home actress got emotional and shared that with a teary-eyed emoji.

Timothée Chalamet and Zendaya’s film has been released on both a streaming service and in theatres. There has also been a high-quality leak circulating on illegal sites. Meanwhile, Tom Holland’s spidey flick will premiere in December.

Must Read: Not Iron Man, Robert Downey Jr Was Approached By Marvel To Play Doctor Doom!

The post Zendaya’s Priceless Reaction To Timothée Chalamet Calling Tom Holland Her Celebrity Crush Is All You Need To See Today! appeared first on Koimoi.

Pollard out of WI white-ball tour of Pakistan

‘Wait for me!’ said Katrina Kaif after Priyanka Chopra and Deepika Padukone walked…

Team for South Africa tour set to be selected this week

Pollard out of West Indies white-ball tour of Pakistan

Rangnick off to winning start with Utd

Pollard out of WI white-ball tour of Pakistan

‘Wait for me!’ said Katrina Kaif after Priyanka Chopra and Deepika Padukone walked the isle