Don’t mess with Marines: US veteran single-handedly halts attempted ARMED robbery in the blink of an eye (VIDEO) 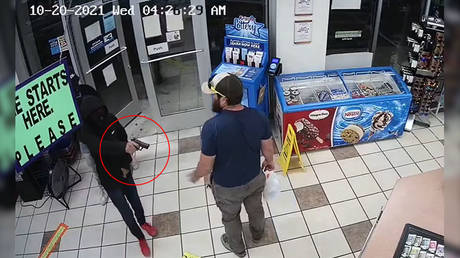 A sheriff’s office in Arizona has released a video of an impressive incident at a convenience store, in which a Marine veteran appeared in the right place at the right time, coolly taking down suspected gun-wielding criminals.

The short but dramatic, movie-like footage from surveillance cameras at a gas station in Yuma County captured a lone customer taking matters into his own hands when masked men with a handgun entered the store at around 4am.

In the clip, posted on Facebook by the local sheriff’s office on Wednesday, a bearded man in a basketball cap, plastic bag in hand, is seen standing with his back to the front door. Then, suspected robbers with their faces covered enter the scene, one of them pointing a handgun towards the checkout counter, with the muzzle just inches from the customer.

The man reacts instantly, disarming the suspect with his free hand in a matter of seconds, before knocking him to the ground. The other suspected criminals, some of whom didn’t even have time to enter through the door, flee. The disarmed man was detained by the customer until law enforcement arrived. He was then booked into a justice center for a count of armed robbery and aggravated assault.

Deputies identified the rescuer as a US Marine Corps veteran. When “asked how he was able to take control of the situation, he stated, ’The Marine Corps taught me not to [mess] around,’” the sheriff’s office shared.

Impressed people online praised the man for his “never ending service,” with many calling him a “true hero.” Commenters said he deserved an award, or unlimited free gas at the least.

WATCH: Would-be robber SQUEALS LIKE A PIG after being body-slammed & pinned to pavement by his intended victim in viral VIDEO

Problem of plenty a happy one for Team India: Kohli

Fauci says more ‘pain and suffering’ still ahead for US