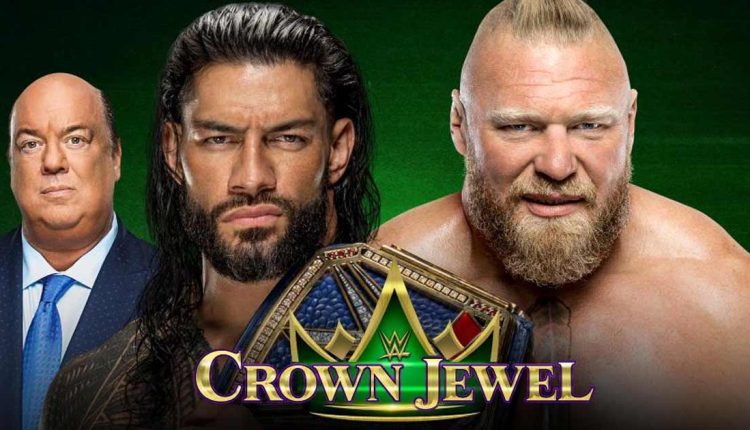 Here’s Where & When To Watch WWE Crown Jewel 2021 In India(Photo Credit: WWE)

The stage is set in Saudi Arabia for one of the most hyped pro-wrestling events of the year, Crown Jewel 2021. WWE has booked some of the biggest matches with the major attraction being Roman Reigns vs Brock Lesnar. In India too, there’s a lot of excitement for the event, but there’s one biggest question- where and when to watch it? So, let us help you!

Ever since Brock Lesnar returned at SummerSlam, fans have been eagerly waiting for him to get into actual in-ring action. He last fought at Wrestlemania 36, so it’s almost a gap of one and a half years. He has challenged Roman Reigns for the Universal Championship. Who will the match and what’s going to happen with Paul Heyman? Let’s wait for the action tonight.

Fifty Shades’ S*x Scenes Were Shot By Jamie Dornan After Wearing A ‘Wee-Bag’ & That Too, A Used One!

Harry Styles’ MCU Role Reveal Pisses Of Marvel & One Direction Fans, A Netizen Says “Why Would You Ruin It For Everyone?”

In India, the kick-off show will start at 8.30 pm. An hour later i.e. at 9.30 pm, the main event will start. You can watch it on Sony Ten 1/HD (English), Sony Ten 3/HD (Hindi) and Sony Ten 4/HD (Tamil/Telugu). You can also watch the live-action on Sony Liv. Repeat telecast will be shown tomorrow on Sony Sports Network channels at 7 am, 12 pm and 8 pm.

In the United States, Crown Jewel 2021 will be accessible through Peacock Network. Fans in other parts of the world can watch it on WWE Network.

Apart from Brock Lesnar vs Roman Reigns, other major attractions are WWE Championship between Big E (c) vs Drew McIntyre, No Holds Barred match featuring Goldberg vs Bobby Lashley, Hell In A Cell featuring Edge vs Seth Rollins and many more.

Must Read: Marvel Fans Surprisingly Ask “When Did Will Poulter Get Sexy?” Swooning Over His Casting As Adam Warlock In GOTG Vol. 3

The post WWE Crown Jewel 2021: Roman Reigns vs Brock Lesnar To Take Place Today! Here’s Where & When To Watch In India appeared first on Koimoi.

WTA versus China: Who will back down over Peng Shuai?

HPSSC recruitment 2021: Apply for 500+ posts in various departments at…

Shunned by humans, a young girl makes new friends with monsters in this graphic novel

Kriti Sanon Apologizes To A Fan Getting Bullied Because Of ‘Param Sundari’; He Jokes…

‘Antim’ Fame Mahima Makwana Is Overwhelmed By The Response For Manda, Says “It’s Like…

Our lives depending on unpacking, decoding CCP’s slogans: Tibetan researchers

Weather, combination worry for Captain Kohli as series on line for Team India

In diplomatic setback to Taliban, UN panel fails to recognise its envoy

‘What a coward’: Teen KO’d by sucker punch during handshakes at US high school basketball game (VIDEO)

Squid Game’s Park Hae-Soo On Board For Korean Remake Of Money Heist! Here’s Who He’ll Be Playing

‘Halyna inspired us all’: Husband of cinematographer shot…