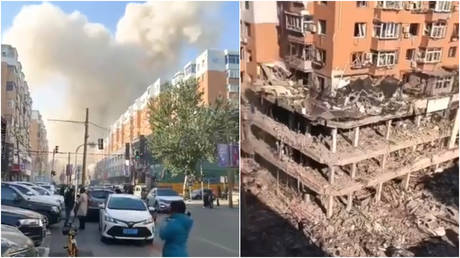 A powerful gas explosion tore through a street in the Chinese city of Shenyang, reducing nearby buildings to rubble and injuring dozens. At least 3 people were killed in the blast.

The massive blast erupted around 8:30am local time on Thursday, state media reported, noting that it’s not clear what triggered the explosion so far. More than 30 people were wounded, and have all been taken to the hospital.

Footage on social media shows the moment of the explosion, which sent enormous plumes of dust into the sky, while other visuals show the aftermath of the blast.

One person was killed and 33 were injured in a gas explosion in #Shenyang, NE China’s Liaoning. Both sides of the road were blown to rubble and fragments of the explosion were scattered all around, with smoke rising about 10 meters high. https://t.co/Uj9GxcmBPx pic.twitter.com/1RrvfQtFaL

Twisted metal and rubble can also be seen scattered around the area, while nearby buildings and cars appear to have sustained catastrophic damage.

👇🏻 a gas explosion at a restaurant on Taiyuan Street, Shenyang, Liaoning province, China at 8:20am Oct 21

The explosion originated at a barbeque restaurant on a busy street of Shenyang city, according to local reports cited by Reuters, which also noted that nothing remains of the establishment beyond “exposed structural beams.” More than 100 first responders were sent to the scene, officials said.

💥 a view from above

The death toll initially stood at one soon after the blast, but has since reached three and could continue to rise as emergency workers get a handle on the scene.

💥 windows at neighboring buildings are shattered…