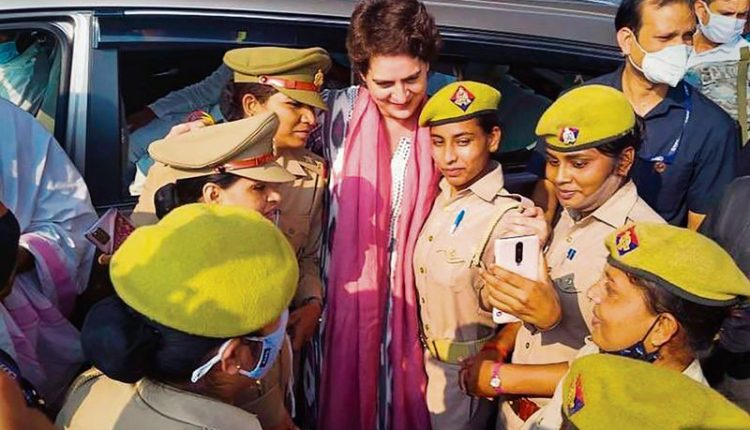 Congress leader Priyanka Gandhi Vadra was today detained briefly and then allowed to proceed to Agra to meet the family of a man who allegedly died in police custody. After stopping Priyanka at the Lucknow-Agra Expressway citing orders of the Agra District Magistrate, the Uttar Pradesh Police permitted her and three others to proceed to Agra.

This was the second time this month that the Congress leader was prevented from travelling to meet families of victims of violence, the first being in the aftermath of the Lakhimpur Kheri violence that killed eight.

Arun Valmiki, a sanitation worker accused of stealing Rs 25 lakh from the Jagdishpura police station here, died in police custody after his health deteriorated during interrogation. The police claimed he was taken to hospital, where doctors declared him dead.

“Arun Valmiki died in police custody. His family is seeking justice. I want to go and meet the family. What is the UP Government afraid of? Why am I being stopped? Today is the Jayanti of Bhagwan Valmiki. The PM spoke of the ideals of Lord Buddha, but the UP Government is attacking those very ideals,” Priyanka said earlier, asking the police what potential law and order disruption her visit to a grieving family could cause.

Earlier today, UP Chief Minister Yogi Adityanath had also said no one would be allowed to “play with the law”.

After she was detained at the police lines following a massive jam along the expressway, Lucknow Police Commissioner DK Thakur said, “Priyanka Vadra has neither been taken into custody, nor arrested. Because massive crowds had gathered along the road and movement of traffic was being hampered, she was first asked to either go to her party office or her residence. When she did not agree, she was sent to the police lines.”

Citing her fundamental right to free movement, she said, “If I am at my office, it is fine; if I am at my home, it is fine, but the moment I want to travel anywhere in UP there’s a problem. I will go to Agra,” she said, a day after the Congress announced 40 per cent seats for women in the upcoming UP elections.

New Delhi: In a major political development today, Samajwadi Party (SP) supremo Akhilesh Yadav and Suheldev Bhartiya Samaj Party (SBSP) chief Om Prakash Rajbhar met and declared they were together in the fight for the Dalits and other weaker sections of society. Rajbhar contested the last Assembly poll with the BJP. Interestingly though, there was no mention of whether the two will also contest the upcoming elections in a coalition or of a pre-poll understanding. Observers, however, said the intention and wordings of the tweet was clear. TNS

Sudheendra Kulkarni: With his Fabindia boycott call, Tejasvi Surya is hurting the soul of Hinduism

NASA’s New Horizons detects anomaly ahead of next…