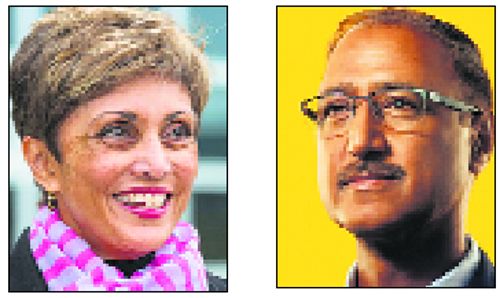 Former Federal Minister Amarjeet Sohi, 57, has been elected as the mayor of Edmonton while Jyoti Gondek will become Calgary’s first female mayor in Canada. Both have their origins in Punjab.

Before entering politics, Sohi was a bus driver. He was elected to the Edmonton City Council in 2007. In 2015, he entered federal politics, got elected as a Liberal MP from Edmonton Mill Woods and defeated Tim Uppal to became the federal minister for infrastructure in the Trudeau Cabinet.

“I am honoured and humbled that you have chosen me to serve as Edmonton’s first South-Asian mayor. I would like to take a moment to thank those who made this historic win possible,” Sohi said after his victory. Sohi, who hails from Banbhaura village in Sangrur, was arrested in Bihar’s Gaya Jail under TADA for about 21 months, but was released later in the absence of any evidence against him.

Gondek was born in the UK to a family of Indian origin. Her family had moved to Canada when she was young, settling in Manitoba. She later moved to Calgary with her husband, where she worked in marketing and served as the director of the University of Calgary’s Westman Centre for Real Estate Studies. She has a PhD in sociology and sat on the Calgary Planning Commission before running for office. — TNS