‘If you don’t want to have children, get the vaccine’: Football owner dismisses Covid jab because it would ‘genetically modify me’ 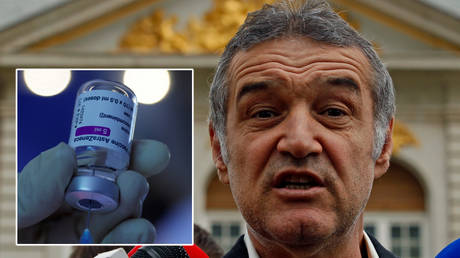 The owner of a football club has told his players that they will become infertile if they receive a Covid vaccine, insisting that researchers warning against jabs are right and urging people to “see what happens” in years to come.

Former politician Gigi Becali, the overlord of 26-time Romanian champions FCSB who is thought to be worth around $500 million and initially built his fortune on a land exchange with the country’s army, has been outspoken in his opposition to vaccines in recent days.

The 63-year-old with a litany of high-profile controversies admitted last week that he had told his players that being vaccinated is “not good” – despite an outbreak leaving the club with just 13 available players.

Almost all of FCSB’s coaching staff, including manager Edward Iordanescu, were unable to attend the home match against Mioveni on Saturday, which the second-placed side still won 3-0.

FCSB owner Becali forbids vaccination for his club’s players. Becali: “If I had a gun on the table next to the vaccine, I’d rather be shot with the gun. There is no vaccination at FCSB”.

OMG. I am spechless..

Becali said that midfielder Constantin Budescu and another unnamed player were the only individuals he knew at the club who had received a vaccine.

“I don’t want to be vaccinated,” Becali reportedly told Bekali Gazeta Sporturilor. “I am human and I do not want to become a ‘trans person’.

“Why should I allow myself to inject a substance that genetically modifies me? I agree with those researchers who say that the vaccine is not good.

Can I just say that this should be grounds for punishment from the Romanian League/FA. His other crazy ideas hurt FCSBs finances/performance/image, this can LITERALLY KILL players, club staff or the people they come in contact with.

“Let’s see what happens in two-to-three years. I am not vaccinated. I told the players, ‘If you don’t want to have children, get the vaccine.'”

Bizarre claims around fertility and receiving the vaccine burst into focus when one of the world’s most followed celebrities, singer Nicki Minaj, told her millions of Twitter followers that a friend of her cousin had become impotent after receiving treatment.

“His testicles became swollen,” the chart-topper wrote. “His friend was weeks away from getting married, now the girl called off the wedding.

My cousin in Trinidad won’t get the vaccine cuz his friend got it & became impotent. His testicles became swollen. His friend was weeks away from getting married, now the girl called off the wedding. So just pray on it & make sure you’re comfortable with ur decision, not bullied

Nicki. I’m double vaxxed & now I get harder than ever. pic.twitter.com/6QNfkePzqu

“So just pray on it and make sure you’re comfortable with your decision, not bullied.”

Earlier this month, Republic of Ireland manager Stephen Kenny, who advocated being vaccinated, appeared to suggest that male issues may have influenced some players’ thinking around treatment.

“There are a lot of myths and a lot of issues around virility that people are concerned about and other issues, you know,” he said. “I do think it is complex.”

‘There are a lot of myths’: Ireland boss suggests ‘virility’ fears over vaccines… as footballer who caught Covid twice shuns jab

There is no evidence linking Covid vaccines with fertility problems. Twitter did not flag Minaj’s curious pronouncement as misleading because bosses deemed it a personal anecdote.

Cliona O’Farrelly, an immunology professor at Trinity College in Dublin, told RTE that she was surprised by the claims.

“These young men would – I think not necessarily all – seem to be in a bubble of misinformation and are hearing stories that there is no real validity to,” she said.

Can I just say that this should be grounds for punishment from the Romanian League/FA. His other crazy ideas hurt FCSBs finances/performance/image, this can LITERALLY KILL players, club staff or the people they come in contact with.

“There is a story going around that the vaccine compromises potency and causes erectile dysfunction or infertility, lower sperm count – which there is absolutely no evidence for.”

Romania is currently at a peak of almost 15,000 new Covid infections a day, according to Reuters, representing around 535 people in every 100,000 in the population.

There have been almost 1.5 million infections and almost 43,000 Covid-related deaths reported in the country since the pandemic began.

FCSB owner Becali: “When I see a vaccinated person, I keep the distance. I sit two meters away. You’ll see what happens in a year or two”.

The country’s vaccination rate is comfortably below the global average, with less than 30% of Romania’s population recorded as vaccinated.

‘Skepticism and fraud’ are two major reasons why vaccine uptake is low in Romania, according to the FT.

“We understand their concerns and it’s their right to do research about all the vaccines and make an informed decision,” health minister Ioana Mihaila told the outlet.

FCSB owner Becali about the anti-Covid vaccine: “I’ll be mad if my players get the vax. These substances modify us genetically. I believe the scientists who say this. I told my players: ‘Go get the vaccine if you don’t want to have children’. I stand firm.” pic.twitter.com/CEBZwob0qi

Becali: “I stand firm: if they point a gun to my head, they still can’t convince me to get the vaccine! Let’s see what happens [to those who got it] in 2 or 3 years.”

“But now it’s the time to make this decision as the risk of getting infected will surge.”

Becali sounds unlikely to change his tune anytime soon. “I didn’t force my family to get vaccinated, either,” said the former Member of the European Parliament, who has been accused of homophobia, xenophobia and turning down a signing on racial grounds in the past.

“But I told them I didn’t get shot in the head, either. Then they thought it might be dangerous and they didn’t get vaccinated.”

‘It’s not about the money’: NBA’s Irving insists vaccine choice is about freedom… but top pundit blasts ‘flat-out stupid’ stance

Top-50 shuttlers to get direct entry in National…