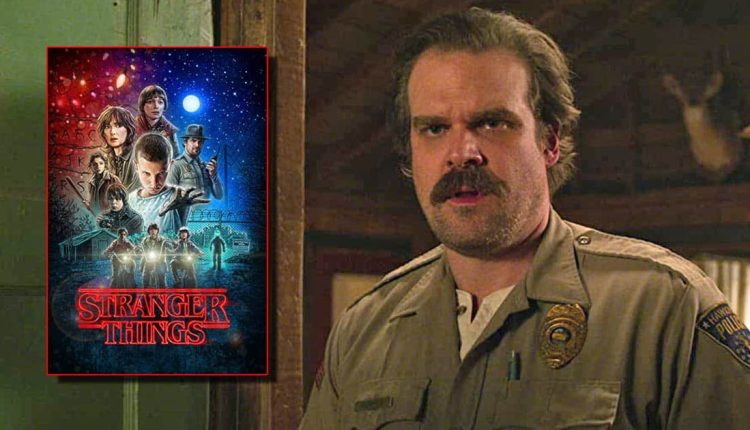 With its release in 2016, Stranger Things has become one of the most successful shows in the digital space. For Netflix, it became one of their crown jewels as it managed to bring in a vast audience from across who connected with it. The show has too much to be hook to. Millie Bobby Brown’s Eleven, who has been through hell and is now helping others to save themselves. The gang, family. But the most adorable of them all is Jim Hopper aka David Harbour.

Harbour first entered Stranger Things back in 2016 with the very first episode. He was introduced as this chain-smoking, small-town police, who is an alcoholic too. He is assigned the case to investigate the disappearance of a young guy Will Byers. Since then, he is fondly called Hop and has made his place in the fans’ hearts. When he brought Eleven home and their relationship nurtured, it was a different treat altogether. Over the seasons he has earned several Emmy Nominations.

But did you know, the makers of Stranger Things did not have David Harbour in mind while casting Jim Hopper first? But there was a bigger star who was in the race and almost won. David himself is spilling the tea now. Read on to know everything you should about the same.

Squid Game: Netflix Is About To Earn Close To $900 Million From The Korean Drama’s Success?
Hawkeye: First 2 Episodes Of Jeremy Renner Starrer To Release On November 24, Disney Shares A Sneak Peek

David Harbour was at the New York Comic Con 2021, it was here he decided to reveal this big secret from the sets of Stranger Things. The actor revealed how it was a bigger star (without taking name) who was about to make a cut as Hopper.

“And I joke with the Duffer Brothers,” David Harbour said. “There was one person that was offered the role of Hopper before me, who was apparently a big movie star, and occasionally when I am in such a self hatred mood that I Google myself, ScreenRant’s got all these articles that are always like, occasionally they’ll be like, ‘Ewan McGregor was off-,’ but I still don’t know who the actual celebrity — if anybody knows, let me know so I can thank them for passing.”

Stranger Things 4 is now the most awaited things. While David Harbour is set to return, he is coming all revamped. Stay tuned to Koimoi for more.

Must Read: Game Of Thrones Trivia #14: Did You Know? George RR Martin Had A Cameo In The Original Pilot Episode

The post Stranger Things: David Harbour Reveals Jim Hopper Was First Offered To A Big Movie Star & Not Him appeared first on Koimoi.

Bale looks for glory with Real Madrid and Wales