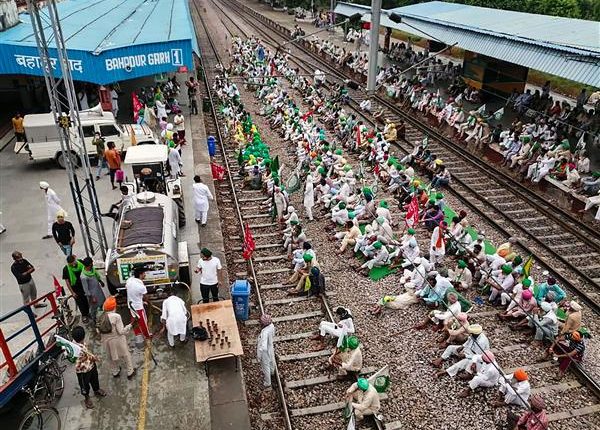 In the North Western Railway (NWR), rail traffic was affected in some sections in Rajasthan and Haryana with two trains cancelled, 13 partially cancelled and one diverted due to the protest.

The trains that have been affected in the Northern Railway zone include the Chandigarh-Ferozepur Express. Its scheduled departure from Ludhiana was 7 am, but it has been stranded there due to a blockade in the Ferozepur-Ludhiana section, the official said.

The New Delhi-Amritsar Shatabdi Express was halted near Shambu station as protesters blocked railway tracks near Sahnewal and Rajpura.

In Rajasthan, the agitation affected train movement in Hanumangarh and Sriganganagar of the Bikaner division.

The Bathinda-Rewari special train and the Sirsa-Ludhiana special train would remain cancelled on Monday, he said, adding that the route of Ahmedabad-Shri Mata Vaishno Devi Katra special train had also been changed.

The train which departed from Ahmedabad on Saturday would run on the changed route via Rewari-Delhi-Pathankot to Shri Mata Vaishno Devi Katra, he said.

The Samyukt Kisan Morcha had said “protests will be intensified until justice is secured” in the Lakhimpur Kheri case. PTI

Documentary on Rahman to premiere on October 26