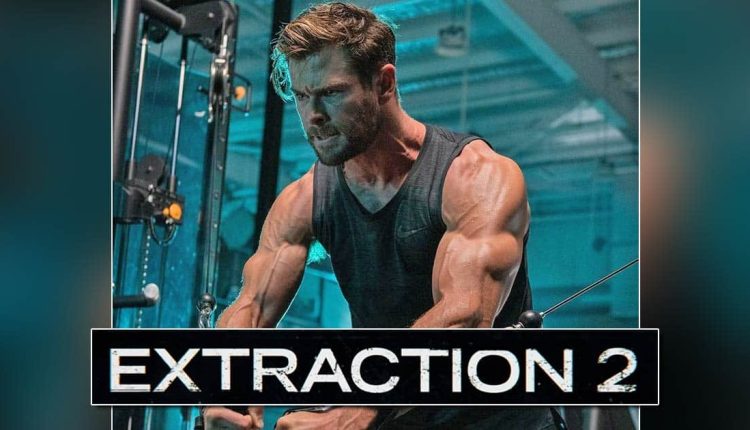 Chris Hemsworth Teases Fans With A Workout Photo Of Him For His New Movie Extraction 2 ( Photo Credit – Instagram ; Still )

Chris Hemsworth shows off his bulging biceps in the new photo posted on social media by the actor. Hemsworth is ready to fight in Extraction 2, a sequel to his superhit 2020 film. A teaser for the second part of the film was released in September 2021, showing the action-packed drama that will occur in it.

The film will be directed by Sam Hargrave, who also created the first installment, and is written by the creator of Avengers: Endgame, Joe Russo. While preparing for the shoot, Chris has teased his fans with a photo that gives a peek into his fabulous body built just for the movie.

Chris Hemsworth took to his Instagram to share the photo. It showed his muscles and veins popping out while he was working out on a cable machine. The ‘Thor’ actor captioned the post by saying, “Six weeks out from shooting on Extraction 2 feelin good and ready. Shout out to my team at @centrfit for giving me all the tools I need for a bulletproof rig.”

Rami Malek Accepts He Has A ‘Resting Villain Face’ On SNL, Daniel Craig Fans Get A Surprise
The Batman: Robert Pattinson & Zoe Kravitz Have Something Magical The Way They Played-Off Of Each Other, Says Matt Reeves

Check out his photo here:

Previously, Chris Hemsworth joked about needing to lift some weights after he had “a few too many celebratory drinks over the weekend.” While the actor is bulking up for his role in Extraction 2, Russo has also teased the fans by saying, “The mission is to up the scale on this one, both emotionally and physically,” as per Comicbook.

The Avengers: Infinity War director also said the sequel had yet to commit to whether Extraction 2 “goes forward or backward in time.” He also told Deadline that “We left a big loose ending [in the first movie] that leaves question marks for the audience.”

Meanwhile, Netflix released its data for its most-viewed TV shows and films. The Chris Hemsworth starrer, Extraction, was the most-viewed movie on the streaming giant with around 99 million subscribers watching.

Must Read: Eternals: Angelina Jolie First Thought She Was Offered A Cameo & Not ‘Thena’

The post Chris Hemsworth Shows Off His Eye-Popping Muscles & Veins As He Gets Ready For ‘Extraction 2’ appeared first on Koimoi.