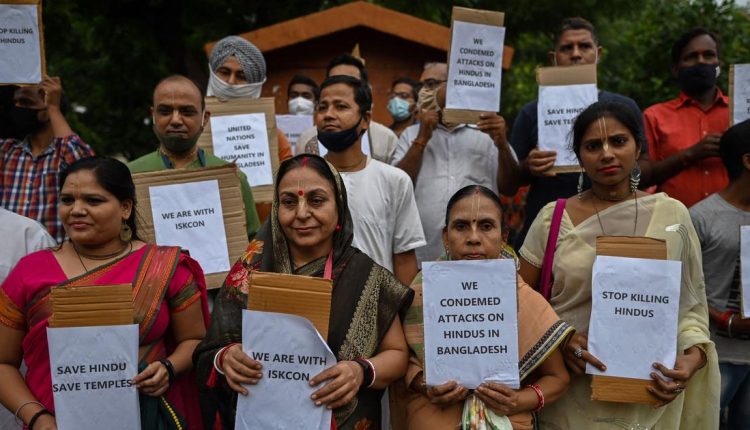 Communal attacks continued in Bangladesh on Sunday as mobs set fire to at least 25 houses and shops belonging to people of the Hindu community living in three villages of the country’s Rangpur district, The Daily Star reported.

The attacks took place in the Majhipara, Bottola and Hatibandha villages in the district’s Pirganj upazila (sub-district). Officer-in-charge of the Pirganj police station, Soroj Kumar, confirmed the attacks.

The police have detained at least 42 people in connection with the violence.

The arson attacks took place after some people alleged that a Hindu man posted religiously offensive content on Facebook, according to the Dhaka Tribune.

Md Sadequl Islam, the chairperson of the local civic body, told the newspaper that the attackers belonged to the Jamaat-e-Islami and its student wing Islami Chhatra Shibir.

Bangladesh has witnessed a spell of communal violence over the last few days.

The attacks started on Wednesday when three people were killed in a clash between a mob and the police in the Chandpur district. The violence erupted following social media posts about the alleged desecration of the Quran in a Durga Puja pandal in Comilla district.

Clashes were also reported from Chattogram, Kurigram and Moulvibazar districts as mobs allegedly vandalised temples and idols of Hindu deities.

On Friday, a temple in Noakhali, belonging to the International Society for Krishna Consciousness, a…

‘Like my hand better without a ring’: Wanda Icardi triggers new round of rumors despite PSG star Mauro hinting at reconciliation

Wait, This H&M Collection Is the Coolest Thing I’ve Seen All Season

We Can All Agree Coats Are the Best Part of Winter, and These 8 Styles Prove It

White House points to surprising cause of crime wave

Most Common Cause of Constipation in Children || Orange Health

Wait, This H&M Collection Is the Coolest Thing I’ve Seen All Season

We Can All Agree Coats Are the Best Part of Winter, and These 8 Styles Prove It

White House points to surprising cause of crime wave

Would like to create history, says India U-17 coach Matos