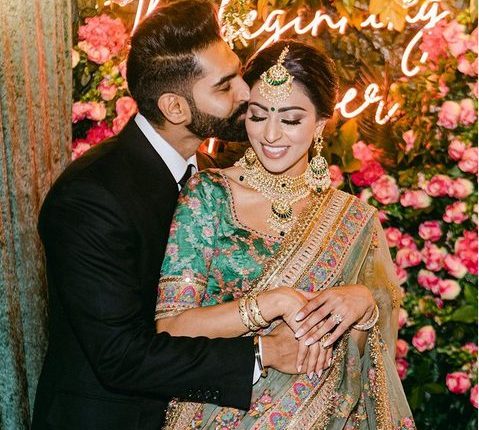 Today begins a new chapter in the life of Punjabi singer-actor Parmish Verma. The ‘Taur naal shadaa’ singer has happily declared he is renouncing bachelorhood. It’s the ‘beginning of forever’ as Parmish takes his relationship to the next level by getting engaged to his lady love Geet Grewal. On this special day, Parmish surprised his perfect companion with a Bentley.

Take a look at Geet’s reaction:

Sharing the joy with his fans, Parmish shared the pictures of his engagement on his social media handle as he titled them “Beginning of Forever- Pamp;G”. His profile description now reads, ‘No More Shada.’

Dressed in a black suit, Parmish has his fashion game right whereas Geet looks ravishing in a green lehenga with floral embroidery. She has teamed up the traditional attire with ethnic jewellery. The couple looks stunning and ‘oh so drenched in love’.

Apart from sharing these beautiful pictures from their engagement, the couple also posted a note of gratitude. It says, “Thank you for your blessings and warm wishes. Love and respect-Parmish amp; Geet.”

For those unversed, Parmish Verma announced his relationship with Geet on Instagram in August. It’s around the same time that Geet, an independent political candidate in Canada, was running her campaign. Parmish made sure to flaunt his lady love and express his pride in her strong and independent ‘better half’. At the time of making their relationship official, Parmish said, “So proud of my better half !!Congratulations, Guneet, on winning the @liberalca nomination! I’m looking forward to you becoming the next Member of Parliament For Mission-Matsqui-Fraser-Canyon in #Canada. I’m with you all the way. You Got this, babe.”

He has often posted pictures and videos of Geet. Among those posts featuring Geet, in one he wrote, “You know I’d walk a thousand miles if I could see you tonight. Joining Geet’s Campaign now Back to Work. Best of Luck @grewalgeet.”

Parmish’s love and support for Geet have been a constant. Once the campaign was over, the actor went on to say, “Geet you have inspired young girls to dream big and not give up on what you believe in. You and your entire team proved that in 25 days you were able to pull off such a strong fight against all the odds. Thank you everyone who believed in you and voted for you, this is not going to be our last election. I have stood in front of crowds, sold out shows and packed festivals. But I have never felt as proud as standing next to you addressing everyone in your speech. I am nothing but PROUD of you Babe. I Love You @grewalgeet.”

Around that time, Parmish had also changed his Instagram profile picture to the ‘Team Geet’ banner and fans couldn’t stop gushing about their love and support for each other. Not just Parmish, even his friends and colleagues from Pollywood rooted for Geet.

Parmish, who recently released song ‘Chori da pistol’ will be seen in film ‘Main Te Bapu’ with his father Dr Satish Verma. The real life father-son duo has already completed the shoot of the film that also features Sanjeeda Shaikh opposite Parmish. This Uday Pratap Singh-directorial is scheduled to release on January 14, 2022.