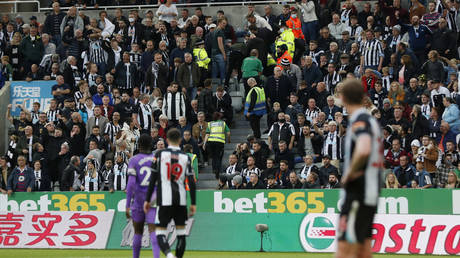 Newcastle United’s Premier League clash with Tottenham Hotspur was suspended before half-time after a medical emergency was reported in the crowd at St. James’ Park.

The game was a highly anticipated one for Newcastle fans as it was the first since a Saudi-backed consortium took over.

However, with the hosts 2-1 down to Tottenham and approaching the last five minutes of the first half, play was stopped due to an apparent emergency in the crowd.

Players including Tottenham’s Sergio Reguilon and Eric Dier were seen desperately gesturing for medics to attend the scene as referee Andre Marriner initially allowed the two teams to have a drinks break before consulting with stewards and match officials and calling the players into the changing rooms.

Newcastle vs. Tottenham has been paused due to a medical situation in the crowd. ⛔️

Fair play to Reguilon, Dier and the players making sure medical attention was gotten fast. 🏥

Respect to Reguilon and Dier for bringing this incident to the attention of the ref and the sideline officials. Praying for the fan and hopefully everything is OK 🙏 pic.twitter.com/awb5a6SlLh

No immediate details were made available regarding the incident, with a crowd announcement simply stating that play had been suspended due to a medical emergency.

The match has been paused due to a medical issue in the crowd.#NEWTOT