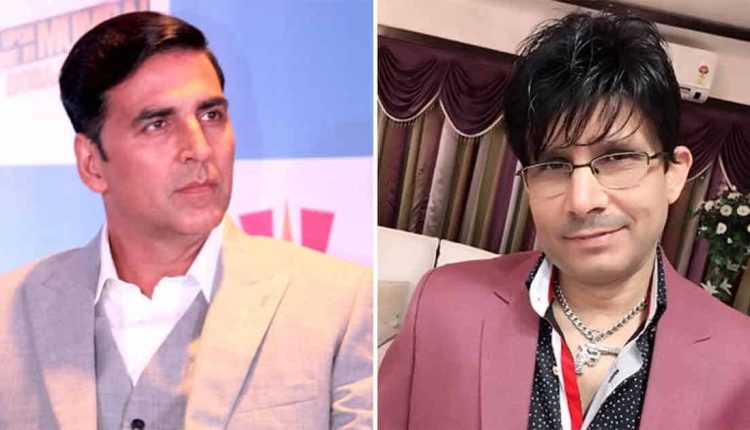 KRK isn’t stopping slamming Akshay Kumar anytime soon! The self-proclaimed critic and Bollywood expert, named Kamaal R Khan, has been taking digs at Akshay for years now. The latest is something that will sting Akki’s fans for a long time.

Time and again, Kamaal has slammed Akshay over his Canadian citizenship. Kamaal feels, the actor just uses patriotism to sell his films and make big money. In his latest attack, Kamaal says that Akshay is in the last days of his career and trying to make as much money as possible.

Taking to Twitter, KRK wrote, “Akki is having 10 films ready and all other actors together are not having 10 films. Means Akki knows that he is playing last 5 overs, Toh jitne runs Bana Sako Banalo.I mean, Jitne crore par Jhaadu Maarni hai Maarlo.”

Akki is having 10 films ready and all other actors together are not having 10 films. Means Akki knows that he is playing last 5 overs, Toh jitne runs Bana Sako Banalo.I mean, Jitne crore par Jhaadu Maarni hai Maarlo.

A few days back, KRK had taken a dig at Bollywood over its fake unity. He called out the actors like Akshay Kumar, Varun Dhawan and others for staying silent on Aryan Khan’s case.

He wrote, “If Bollywood is a family then all Bollywood Wala should have supported #AryanKhan. But no big star except @iHrithik is speaking. Ajay, Akki, Varun, Shahid, Juhi, Javed Akhtar, Farhan, Twinkle, Kajol almost everyone is silent. Because nobody is a friend or enemy in this Bollywood.”

“Bollywood is having a very simple formula. Whoever is successful, every Bollywood Wala is his friend. Bollywood people don’t know him, whoever is flop like Imran Khan, Faisal Khan and Harman Baweja. Means Bollywood people relation depends on the commercial value of the person, ” he added.

KRK even praised Kangana Ranaut for speaking out clearly. Even though he disagreed with her beliefs and ideas, he applauded Kangana for at least making her stand clear.

Must Read: KGF Chapter 2: Yash Has Been Happily Given A Monstrous Amount & Profit-Sharing By Makers?

Bigg Boss 15: Salman Khan Warns Miesha Iyer & Ieshaan Sehgaal After Their Kiss On National TV; Says, “What If You Guys Don’t Get Married?”

‘I Ran For My Life’, Nushrratt Bharuccha Recalls When A Ghost Haunted Her…

Ankita Lokhande & Vicky Jain Tied The Knot In An Intimate Ceremony? Here Are The Deets!

Spider-Man: No Way Home’s Benedict Cumberbatch Reveals He Hasn’t Read The Full Script: “I Did That On Purpose”

Coach Benitez plays down rumours of discontent at Real…