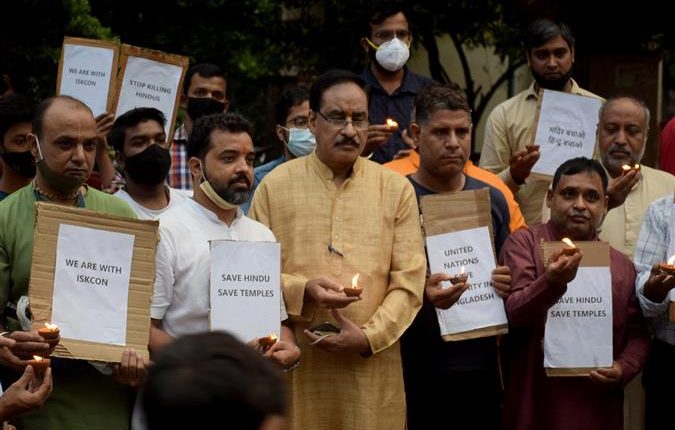 Minorities in Bangladesh protested in several cities as vandalism of temples and attacks on Hindus petered away after the end of Durga Puja festivities, in the second riots against Hindus in seven months.

ISKCON has asked Prime Minister Narendra Modi to raise the issue with Bangladesh PM Sheikh Hasina and seek strong action against the guilty after its temple in Noakhali suffered significant damage and the body of a third devotee was recovered from a pond on Sunday.

The sculpture of its founder Srila Bhaktivedanta Swami Prabhupada was also set on fire. PM Modi had last month released a commemorative coin stamp on his 125th birth anniversary.

Bangladesh media reported the rape of a Hindu family that led to the death of a girl-child, raising the death toll to about 20.

“No incident has been reported since Saturday night. Our security forces are working with patience. Those who are trying to destroy communal peace will not succeed,” assured the Minister.

However, it now transpires that the attacks have been going on for nearly a month. On September 22, Hindu organisations reported the defacing of the idols being prepared for the festival. In the latest bout of violence and vandalism, the attacks had started about a week back but were reported and noticed after they gathered intensity from Thursday. For instance, on October 11, mobs stopped a puja at the Sankhannidhi Temple in Dhaka and on the same day, an attack took place as the Durga idol was being taken into the puja mandapa in Kotwali, Chittagong.

Seven months back, a dozen people were killed, properties ransacked and a temple set on fire in protest against PM Modi’s visit to Bangladesh.