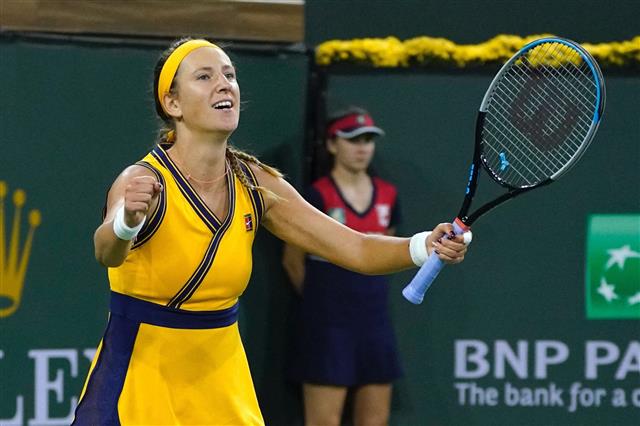 Indian Wells (USA): Spain’s Paula Badosa continued her dream run in the WTA event at the BNP Paribas Open here as she defeated Ons Jabeur of Tunisia to set up a clash in the final with Victoria Azarenka (in pic) of Belarus. Paula ended the winning spree of Ons, who is set to become the first Arab woman to reach the top 10 when the WTA rankings are released on Monday, defeating her 6-3 6-3 in the semifinals. Azarenka pulled off a stirring comeback victory as the former world No. 1 defeated Jelena Ostapenko of Latvia 3-6 6-3 7-5. In the men’s section, Taylor Fritz beat third seed Alexander Zverev 4-6 6-3 7-6(3) to reach the semifinals. Nikoloz Basilashvili outlasted second seed Stefanos Tsitsipas 6-4 2-6 6-4. Agencies

Indian golfer Aditi Ashok carded a 2-under 70 to be placed tied-13th after the second round of the Aramco Team Series here. Another Indian, Tvesa Malik (74-72), was T37. American golfer Nelly Korda, the world No. 1, carded 69-66 and was on top of the individual standings. In the team competition, Team Ashok — which also includes Pia Babnik, Marta Sanz Barrio and amateur S Keogh — was placed T13, alongside the group led by Korda, at 21-under. Tvesa, who is part of Team Salas, led by LPGA player Lizzette Salas, was T26 at 14-under.

Indian golfers Shubhankar Sharma and Gaganjeet Bhullar failed to live upto their own expectations, making an early exit from the Andalucia Masters after missing the halfway cut in the European Tour event. Bhullar, who had an 82 in the first round, improved by 13 shots with a 69 and totalled 9-over but was still way off the cut line, which fell at 6-over. Sharma (79-75) was even further down.

London
United stumble again as City and Liverpool march on

Troubled Manchester United fell to a 4-2 defeat to Leicester City on Saturday while Liverpool and Manchester City continued their title challenge with comfortable victories. United have picked up just one point from their last three Premier League games and slip to fifth place, five points behind leaders Chelsea (19 points). Liverpool have 18 points with City on 17. Liverpool’s impressive start to the season continued with Roberto Firmino scoring a hat-trick in a 5-0 demolition of Watford at Vicarage Road, inspired by Mohamed Salah. Manchester City’s win over winless Burnley was less spectacular but still comfortable with goals from Bernardo Silva and Kevin De Bruyne making sure of the three points. Chelsea beat Brentford 1-0.

• ‘There is an Udham within us, says actor Vicky Kaushal who plays the revolutionary hero in Sardar Udham