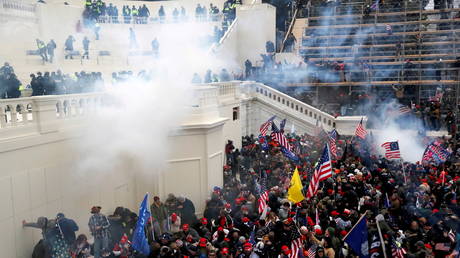 A veteran Capitol Police officer has been charged with obstruction of justice after allegedly urging a participant of the January 6 riot to delete Facebook posts showing him inside the building, and warning him of investigation.

A six-page indictment targeting Michael Riley, a Capitol Police officer for nearly 25 years, was filed by US federal prosecutors on Friday. Riley was arrested and appeared before the US District Court in Washington later in the day, where he was charged with two counts of obstruction. Each of the charges carries a maximum sentence of 20 years in jail if convicted.

According to the charging documents, Riley actively communicated with a participant of the January 6 pro-Trump rally, which devolved into rioting and culminated in members of the crowd invading the Capitol building. The violence left five people dead, including one police officer.

Riley and the rioter, identified only as ‘Person 1’, did not know each other, but both were avid fisherman and members of fishing-related Facebook groups, according to the indictment. The two befriended on Facebook on January 1, with the officer first communicating with the other man on January 7 in the aftermath of the violence.

“Hey [Person 1], i’m a capitol police officer who agrees with your political stance,” Riley allegedly told the protester, warning him of the ongoing investigation.

The two ultimately exchanged “dozens more Facebook direct messages,” investigators claim, with the rioter sharing several videos showing him “outside and inside the US Capitol.”

Later, the officer was contacted by another man about Person 1, who provided the officer with a link to a January 6 livestream which showed Person 1 “smoking an unknown substance inside the Capitol building,” as well as a screenshot showing him “inhaling from a hand-rolled cigarette.” Riley allegedly told the second person he was aware of that behavior.

The communications between the officer and Person 1 allegedly continued until the rioter ended up arrested by the FBI on January 19. The man warned Riley of the development the next day, telling him that the “FBI was very curious that I had been speaking to you.”

“They took my phone and downloaded everything,” Person 1 allegedly told the officer.

While Riley told him it “was fine,” he subsequently deleted all the messages to and from Person 1. On January 21, Riley denounced the short-lived Facebook friendship, abruptly calling the man out for smoking substances, believed to be weed, inside the government building.

“I tried to defend you but then he showed me a video of you in the Capitol smoking weed and acting like a moron,” the officer allegedly wrote. “I have to say, I was shocked and dumbfounded, since your story of getting pushed in the building with no other choice now seems not only false but is a complete lie.”

Trump asks US judge to force Facebook to restore his account, 9 months after he was booted off site over Capitol riot ​​– media

Capitol Police has acknowledged the charges against the officer, stating that Riley has been put on administrative leave pending the resolution of the case.

“Obstruction of Justice is a very serious allegation. The Department was notified about this investigation several weeks ago. Upon his arrest, the officer was placed on administrative leave pending the completion of the case,” the force’s chief, Tom Manger, said in a statement, adding that an internal administrative investigation will be launched as well.

Tamil actor Vishal on marriage: Next biggest transition in…

Over 100 farmer leaders under ‘house arrest’ in Agra region