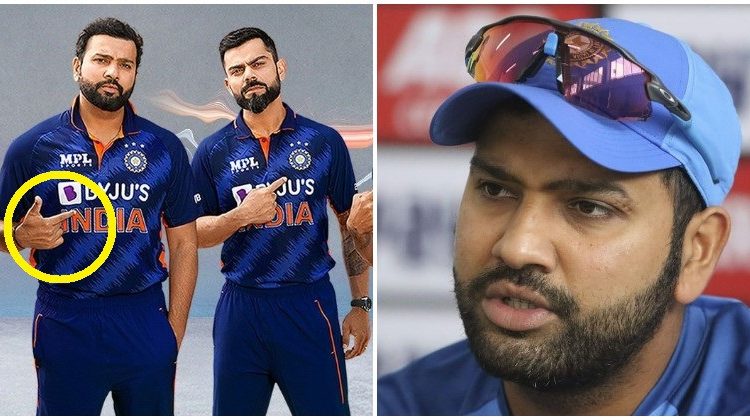 With just a couple of days to go for the T20 World Cup 2021 to begin, the Indian cricket team revealed their fan jersey for the tournament called the ‘Billion Cheers Jersey’. It is designed to pay homage to the die-hard fans of the team and their cheering has been converted into noise frequency patterns running diagonally on the t-shirt.

It looks decent and the boys look pretty good wearing them as well. However, it is the poster in which Indian cricketers KL Rahul, Rohit Sharma, Virat Kohli, Ravindra Jadeja, and Jasprit Bumrah are seen featuring, that has seemingly created a big stir among the fans.

Twitter user @NotMK45 recently shared the same picture from his social media handle suggesting that the team vice-captain Rohit Sharma was pointing towards ‘India’ printed on the jersey, while the rest of his teammates were pointing towards the BCCI logo, implying that Sharma plays for the country while others play for their cricket board which pays them big money.

As petty as that sounds, the message seems to have triggered a lot of people for a lot of reasons, all of whom flocked to the Twitter post to vent their frustrations.

First, there are people who backed up this claim and praised ‘Hitman’ for always putting his nation ahead of everything else, including money. They called him “the most genuine player of this current era” and asked others to learn from him.

Coz he stands and plays for our nation.. He is most genuine player of this current era.. some people still have opportunity to learn from him

Yes. Agree. He always keep India first. He has proved many time.

Thats why we love this man

Not like that, he may be saying to youth study well and play well.

Lmao he is pointing towards BYJu’s…

And finally, there was a whole lot of people who were simply curious about whatever it was that KL Rahul was doing with his jersey while standing in one corner grabbing it with his fist:

Meanwhile KL Trying to get Rid of It

The argument only goes on to show the kind of impact the game of cricket has on its fans who will stop at nothing to talk about their favourite cricketers and why they are so well-regarded in this country.

Which logo do you think Sharma is pointing towards in this picture and does it make any difference to your opinion? Let us know in the comments below!