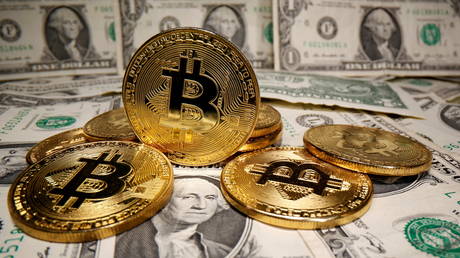 Miami’s mayor is moving forward with a plan to pay city workers in bitcoin, calling the switch from fiat currency a “major priority.” However, neither city workers nor the Miamians who pay their salaries have yet been given a say.

City employees would be able to receive all or part of their paychecks in the much-hyped cryptocurrency, Mayor Francis Suarez told Bloomberg on Tuesday, adding that if the county authorities permit it, residents could even pay their taxes in bitcoin. Miami residents have not yet been given any choice in the city’s hot pursuit of the cryptocurrency, even though Suarez wants the entire state to hold bitcoin on its balance sheet – something that is currently illegal and could lead to massive financial losses for the state should the labile currency tank.

Experts warn of ‘extreme greed’ territory for bitcoin as crypto pushes toward $60,000

Suarez announced the city would “differentiate ourselves as a crypto capital of the United States or of the world” in the interview, announcing the city was putting out a request for proposals from any financial-technology partner capable of designing and developing such a system.

“We’re going for a request for proposal in October to allow our employees to get paid in bitcoin, to allow our residents to pay for fees in bitcoin and even taxes potentially in bitcoin if the county allows it,” Suarez told the outlet.

Currently, Florida law does not permit local governments to hold volatile assets like bitcoin on their balance sheets, and Suarez recently declined to respond to a question regarding whether he is lobbying the state government to change that rule. It’s not clear if there is a ballot initiative to approve the bitcoin switch, and while city employees presumably have the option to continue receiving their salaries as they have in the past, such heavily-promoted new technologies are often accompanied by heavy pressure campaigns. Faced with either the ‘carrot’ of a bonus or the ‘stick’ of a penalty, many workers will likely throw up their hands and go with bitcoin.

While some employees are no doubt familiar with the ins and outs of cryptocurrency, others might easily be convinced to jump headfirst into an asset they don’t understand. A recent YouGov poll found that while 38% of Americans believe cryptocurrencies will be widely accepted as a means of payment in a decade, more than two-thirds admitted they “don’t really understand cryptocurrency.” These employees could easily be cajoled into adopting a payment system they know nothing about and ultimately end up losing their savings in the next crash.

It’s not the first time Suarez has urged massively consequential action with no input from his constituents. In July, the mayor suggested a US military intervention in Cuba following a weekend of highly publicized protests, something both the political Left and Right agreed was a bad idea.

The mayor has long sought to make Miami a bitcoin-friendly city, touting its nuclear power as a clean alternative energy source for the massive amount of electricity needed to mine the currency. The city also attracted crypto exchange FTX, which reportedly agreed to pay $135 million over 19 years for naming rights to a basketball arena.

Nearly 90% of bitcoin have been mined, and new coin issue unlikely after 2140 – analysts

However, a February effort to get city employees onto the blockchain was quickly nixed, cut back extensively from taking action to launch bitcoin payments to merely studying such a plan. Like the one announced in October, that effort would have allowed Miami residents to pay all or part of their property taxes or fees from the city in crypto.

The mayor has lamented that since that failed launch, bitcoin values have surged “30 to 40%,” making any investment into the currency look “genius” in retrospect. In fact, bitcoin has surged 20% since February – though that’s still nothing to sneeze at.

Miami residents might also be worried about the value of their assets – last month, El Salvador adopted bitcoin as legal currency only to watch helplessly as its value plummeted.

But Suarez has had some success with blockchain currencies. His administration’s ‘MiamiCoin’ initiative, driven by nonprofit investors, reportedly netted over $7 million in August, and looms as a potential alternative to bitcoin.

However, a cryptocurrency run with the help of the government is anything but ‘crypto’, and giving the city administration access to one’s finances runs contrary to the privacy-forward spirit of the original bitcoin project.

Hyderabad: Accenture looks to hire across verticals and experience