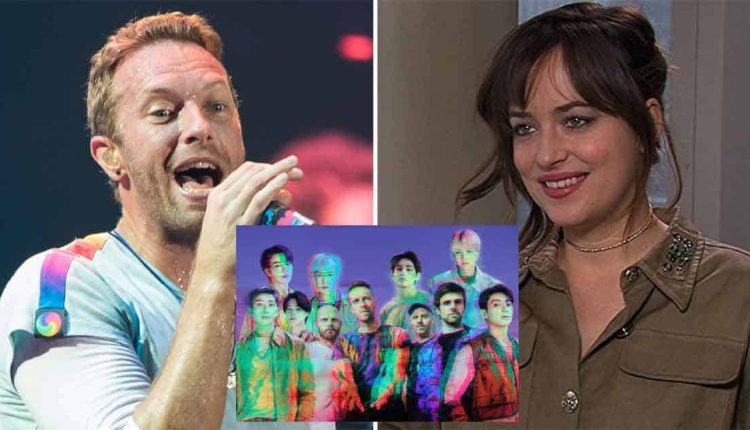 Dakota Johnson just had a fairy tale moment when her beau Chris Martin professed his love for her in front of thousands of people during his concert. This sounds like something too good to be true, but it has actually happened. The fans and even we are losing our minds and hearts over it!

The two sparked dating rumours back in 2017 when they were spotted grabbing food together. Though it was never officially confirmed, the couple were pictured together on several occasions.

It has been a few years since then, and now the fans don’t need any more confirmation bigger than this. During a Coldplay concert on Tuesday, Chris Martin performed with his band at Shepherd’s Bush Empire in London to mark the release of their latest album ‘Music Of The Spheres.’ It is then when he professed his love for Dakota Johnson.

A video that has now gone viral shows Chris Martin pointing to the balcony where Dakota Johnson was seated and said, “This is about my universe, and she’s here!” After that, the band started to play their new song, ‘My Universe’, which is a collaboration with the South Korean boyband BTS.

omg chris martin dedicated My Universe to dakota johnson and she cried the way he pointed at her while singing “you, you’re my universe and i just want to put you first”
pic.twitter.com/US85Xrs4jG

The crowd went into an uproar moments after Martin said that. Meanwhile, fans flooded social media with comments in support of the power couple. One fan wrote, “All i can say is i better date someone that will write and dedicated a song for me and perform it in front of thousands of people like chris martin did for dakota johnson.”

While another one wrote sarcastically, “Chris martin and dakota johnson are responsible for me wanting a relationship f*ck them honestly i just want to be alone and here they come being all cute and shit like i want that too???? i want to call someone ‘my universe’ why am i alone, and sad hoseok pick up my calls baby.”

I FEEL LIKE I LIVE UNDER A ROCK CHRIS MARTIN FROM COLDPLAY AND DAKOTA JOHNSON???????

I was today years old when I found out that that chris martin and dakota johnson have been dating (for awhile) and he dedicates My Universe to her pic.twitter.com/kI99lsEbvk

this is…. ADORABLE chris martin sang Mu Universe and dedicated it to Dakota Johnson, my heart pic.twitter.com/GYEUuYcJHd

Not only did Chris Martin and Dakota Johnson fueled dating rumours earlier, but there were also speculations of them being engaged. Could this be another sign of it? Share your thoughts with us!

Must Read: Dave Bautista aka Batista Says Films Like ‘Dune’ Makes Him Feel No Regrets For Quitting Professional Wrestling

The post Chris Martin Gives A Sweet Shout-Out To His Love Dakota Johnson While Performing On His Song Featuring BTS appeared first on Koimoi.