This "accelerated learning" program will reach more than the 2,500 out of 65,000 students served by gifted and talented, officials said. 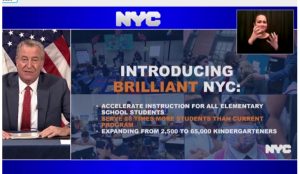 Brilliant NYC will break down “artificial barriers” such as a test for four-year-olds that excluded and segregated talented youngsters, de Blasio said. Only 2,500 out of 65,000 kindergarteners go into gifted and talented programs, he said.

“We’re flipping the script,” he said. “We’re saying, let’s reach all 65,000 and see what they have and help them draw it out and help them build their future.”

Find out what’s happening in New York City with free, real-time updates from Patch.
Your email address
Let’s go!
Such programs received wide criticism from parents and advocates who argued they perpetuated racial segregation in schools. But de Blasio’s announcement also prompted a backlash from some parents and elected officials, particularly among Asian-American families.

But de Blasio and Chancellor Meisha Porter acted as if the gifted and talented phase out would be a done deal.

“With the expansion of accelerated learning to all 65,000 students, 26 times more students will benefit from this tailored instructional model in its first year alone,” Porter said. “This is a game-changer for families, students in schools, and it will mean the end of determining what four-year-olds are gifted and talented based on their performance during a single test.”

Porter painted a broad strokes pictures of how Brilliant NYC will work.

All 4,000 public school kindergarten teachers will receive additional training so they can identify student strengths and offer project-based enrichment opportunities, she said.

Classrooms will keep students together, rather than being separated by the “G&T” label, she said.

“Classrooms will house different instructional levels and tap into students’ unique interests,” Porter said. “Seven borough-wide teams who are experts in accelerated instruction will also work with schools to support implementation, and additional teachers will be hired in neighborhoods that historically had little to no G&T programming.”

School officials, including Porter, will spend the next two months performing community outreach for input on how to craft the final Brilliant NYC program.

The final plan will be unveiled in December, the last month of de Blasio’s term as mayor.

Free Trade Agreement is the Next Frontier in India-US Ties: USIBC President

Knowledge can’t be locked, we don’t agree with…