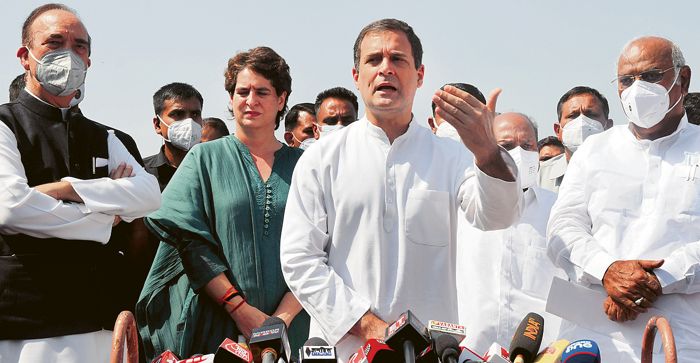 A five-member Congress delegation on Wednesday called on President Ram Nath Kovind urging his intervention for dismissal of Minister of State (Home) Ajay Mishra and institution of an independent judicial probe by two sitting judges of the Supreme Court in the October 3 Lakhimpur Kheri violence that killed eight persons, including four farmers. The delegation, consisting of Rahul Gandhi, former ministers AK Antony, Mallikarjun Kharge and Ghulam Nabi Azad and AICC general secretary (UP) Priyanka Vadra, told the President that ends of justice could not be served until Mishra was sacked considering his son Ashish Mishra is an accused in the case and was seen “by many eyewitnesses at the crime scene”.

After the meeting, Priyanka said the President had assured he would talk to the government on the issue today itself, while Rahul noted that no justice could be done until the junior minister was dismissed. — TNS